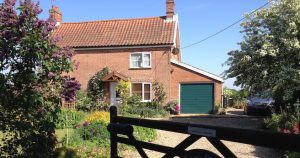 I came to this house 14 years ago in 2003. At the front of the house there is a driveway to the lane. The drive regularly floods in wet weather because, I am told, there was a pond filled in some time in the past, and a large green space which fronts the road. When I arrived this area was austere, barren: a lawn, a bed with three spiraea and two yew bushes, and some paving slabs, bounded on the south-western side by a double hedge, privet and leylandii, and on the north east by a fence. The back garden,

which forms a sort of peninsula flanked by two fields, and ending in a narrow pointed strip, consisted of more grass, prettily shaded by trees – ash, chestnut, walnut, elder, and graced with a red shed which I later found out had been built with materials pilfered from the construction of the nuclear power station, Sizewell B.

My aim was, and is, to be as self-sufficient in vegetables as the surface area and the East Coast climate permit.

To that end, during the hot summer of ’03, I covered the back area with the garish patterned carpets removed from the house in order to kill the grass, and then turned over the ground. It is calcareous yellowy beige clay, and hard work. I needed organic input.

And so the first chickens arrived in 2004.

I constructed a run round a converted shed, given by a friend. A local farmer, Joe, provided straw. Each year the rotted down straw, impregnated with chicken droppings, is dug into the garden. Gradually the soil improved and became more workable. The chickens ranged in the garden and over the fields. Surplus eggs were sold, and the whole system became just about sustainable….

…until, for the first time, early this summer (2017) I had a visit from Renard, when my hens were (ironically) “safely” shut up in their run. It was probably a vixen, hungry and with cubs, who got in through a gap in the wire netting in the roof of the run. All seven chickens dead, two taken – an amazingly athletic feat on the part of the fox. At the time of writing (July) I am waiting for the next release date of “rescue” hens from the chicken factory farm at nearby Eye. The run has been mended, strengthened, and – I hope – fox-proofed. I miss the chickens. Watching them, listening to their wittering and cooing noises, is calming, therapeutic.

There have been many changes since I arrived. At the front one of the yew bushes and the privet hedge have come down. I have planted and planted, erected trellis arches, dug beds, and people are kind enough to say it is a real “cottage” garden.

There is no doubt that what I grow best is ground elder, probably imported with a gift of a plant from someone’s garden. You cannot win. Its roots travel and twine themselves round other roots, and set rock firm in the clay. On a gardening programme I once heard the question: “What advice can you give about my infestation of ground elder?” Answer: “Move.”

At the back, the business end, the red shed came down, and was replaced with a studio where I paint. Probably more successfully I grow vegetables.

It is a constant struggle against weeds, wind, torrential downpours and long periods of drought. Any laziness is immediately reproached with unwanted growth and a generally unkempt, messy look. As I enter my eighth decade (I was 70 this year) it keeps me active, as though the young dog did not demand sufficient daily activity.

When the sun shines it is my corner of paradise.