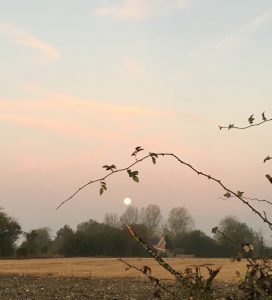 The clocks have gone back. It is a moment of some dread to those of us whose moods plunge, and whose bodies ache and creak and long to sleep when light lacks. Now the dark comes creeping up in the afternoon, cutting off contact, compressing meaningful activity into a few precious hours, causing gloom and despondency.

At this time of year the Black Dog stalks my steps, ready to spring and seize on any weakness, any imagined slight, any frustration or anxiety, and worry and gnaw at it.

I have often joked that I acquired my own black dog to ward off these tendencies to winter depression, but as the young dog approaches two years old and reaches full physical maturity her coat is noticeably paler, and her father’s colouring is emerging more. Is she my own Portrait in the Attic? As she becomes less black will I grow more gloomy? 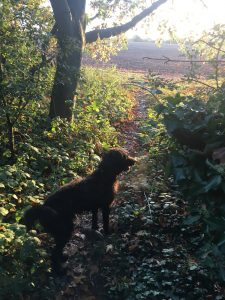 And with the change of hour has come a change of weather. The wonderful Indian summer, which succeeded our summer of summers, has ended with a blast of Arctic air, and rain! rain which within hours turned dust to mud. 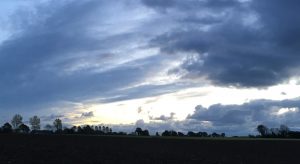 Golden October has gone. The warm – almost hot – low sun casting long shadows; the mornings still and pure and perfect. All now gone. Those mornings…we were out every day in the half-light when the senses are more acute, and the smells of moist leaves, decaying fruit, nocturnal animals are most vivid. We heard the tawny owl with his “Ter-wit!” and sometimes the answering “Woooo”; at first light we saw the barn owl hunt. In the southern sky Procyon and Regulus shone bright and high, and the moon sailed behind the trees.

In the cool of the morning the young dog’s breath would come in golden clouds as she galloped towards me, the rising sun behind her. Gone. Replaced by inky indigo skies and hailstorms. 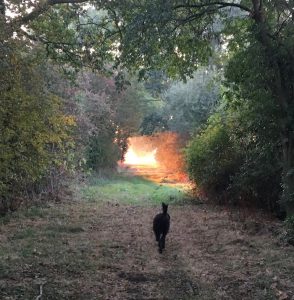 Gone too is the last blanched straw on the stubble fields, turned to umber as the earth yields to the plough. 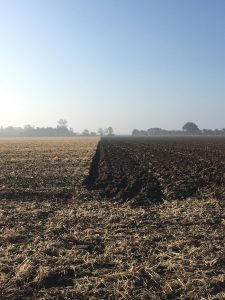 The roses in my garden responded to the glories of the weather with a display that outshone that of June.

Afternoon walks were over fields dry as dust, buzzards wheeling overhead, sometimes as many as five together in the blue blue sky. Now we walk head down into the cold wind.

Occasionally a walk produces a surprise. 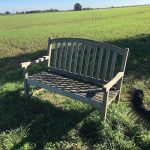 We come across a wooden garden seat in the middle of a field. Who carried or dragged it there? Someone who liked to sit down and rest surrounded by crops? Surely not the farmer so he could sit, enthroned, monarch of his land? Farmers don’t have the leisure to sit and contemplate.

I wrote last month of a scary encounter with a large herd of Devonshire Red Ruby cattle. I said never again…But a few weeks later, back home, while on a public right of way across a field we unexpectedly encountered some British White heifers. 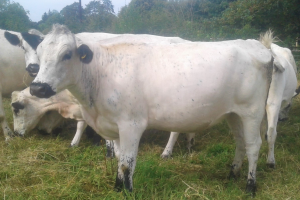 This is a breed which trampled a woman to death locally about ten years ago. She made the mistake of trying to rescue her dogs. So – dog on lead – we made our way across, me trying to look braver than I felt. They approached, as cattle will. As they got close, one of them snorted. The dog – spooked – shied, knocked into me and I went flying under the hooves of the nearest. Fortunately the lead was pulled out of my hand and the heifers (heifers again!) turned their attention to the dog. I have never scrambled to my feet so quickly, unaware at the time that I had painfully turned my recovering broken ankle. We got out of the field unscathed, but I was trembling and feeling sick. This is my dog’s second attempt at killing me this year. 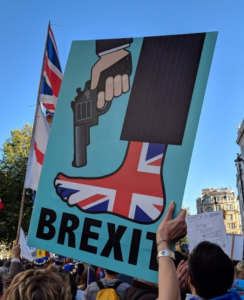 A charity commitment prevented my taking part in the huge anti-Brexit march in London on 20 October. I had been on the previous two when 100,000 walked through London to Parliament Square. This time 700,000 came, to demand a People’s Vote on any final Brexit deal, if there is a deal… 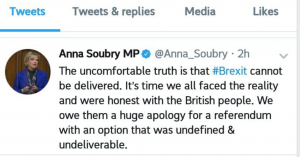 Until the clock strikes midnight on 29 March I pray this lunacy may be stopped. One elderly, and more than somewhat infirm, lady from our parish, who leans heavily on a walking stick, marched. She said the atmosphere was electric. I so regret not going, for part of the gloom is our sheer impotence in the face of this folly.

And now to more ignorance, prejudice and bigotry. I attend a small art group in the next-door village. This consists mainly of elderly ladies carefully – scrupulously even – copying pretty photos. I don’t want to do that as I prefer to paint “live”, but I’ve been told I must get out more, and it gives me a couple of hours to play with colours and forms, and to catch up on the local craic, such as it is.

A few weeks ago a friend asked me to enquire whether a man who had been temporarily homeless but now newly arrived in the village might join the group. Local people had been kind to him generally, had given him furniture and equipment. I put it to the organizer. The reaction was not favourable, but she said she would put it to all the members. I could not believe the comments. “He makes my flesh creep,” said one wealthy farmer’s wife. “I don’t know why people can’t get on their own two feet without being given all this aid. I expect it was his own fault he was homeless,” said another. Unbelievable. He has not, so far, joined the group.

And worse. Racism. On a different occasion someone who should know better said, out loud, “All [insert racial type] are animals.” I challenged. She defended her right to say it. 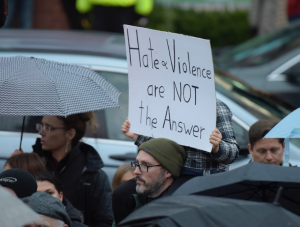 “What’s wrong with that?” she asked. We can’t stop people’s opinions, though you’d think that someone who had lived through the wars of the mid 20th century, as she had, would think twice, but such a blatant public expression of blind prejudice…? Today, as I write, we hear of the shooting of eleven people in a synagogue in Pittsburgh and its aftermath. Although the target of her venom was not Jews, this sort of unthinking, blind hate speak is the thin end of violence and killing. All over the world the far right is gaining ascendency. We have learned little since the 1930s. In the United Kingdom this will only get worse after we leave the EU, and the police have been told to expect mounting hate crimes.

I don’t really want to be part of that group any more.

Last month I also wrote of how the past can powerfully and unexpectedly break in on the present, and how on that occasion music caused that reflection. In early October the past sent an avalanche not of nostalgia but of turmoil that engulfed me for a while, and with which I could deal only by somatising the pain. Decades ago, around five years after my husband died, I became engaged to a man who was bipolar, flawed, and who operated on many levels. I was ignorant enough to think love could save him. Before we met his wife had divorced him; he had been cut off from his children, and had on several occasions attempted to take his own life. He succeeded weeks before our wedding, when his multiple deceptions threatened to come to light. 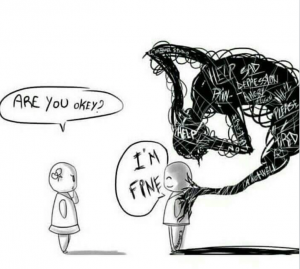 His then ten-year-old son is now the age his father was then. This son’s wife had obviously done a lot of googling, and managed to contact me, asking if I would be willing to help her husband who was struggling to understand his father’s life – and death. I replied immediately that I would. And since then I have heard not one word, leaving me dealing with the situation all over again.

And so for all its sunlit beauty October has not been an entirely easy month. November brings the beginning of winter, the commemoration of the ending of the Great War, and the start of the race to Christmas. Like our ancestors, we shall light a fire in an attempt to ward off the cold and dark. 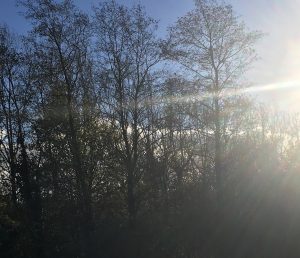