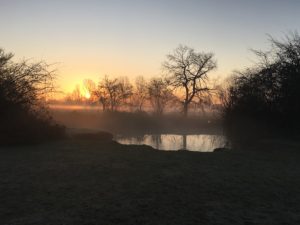 February fill dyke – so goes the old country rhyme, and the beginning of the month looked as though it would fulfil this meteorological tradition. I returned from Calais in heavy rain, and the first week was wet, cold, and then four days of wild destructive gales. We need the winter rains: ditches and dykes still have little water, and ponds even less. 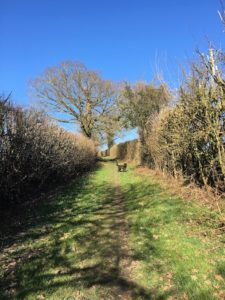 But then the sun came out, and for the rest of the month it was warm, even hot, and temperature records tumbled, and the sky was a deep Mediterranean blue. The paths have dried, the mud is gone, and spring dominated. That first delight at discovering a snowdrop was swiftly eclipsed by joy at the first shy primroses, then whole banks of them, but oh! that’s now old hat –there are daffodils!

It is not normal; our weather is topsy-turvy. This time last year the Beast from the East had us in its cruel and icy grip; villages were cut off by snowdrifts for days; we shivered in Siberian gales.

But little is normal at the moment, and all is topsy-turvy in the world. My anxiety is high. Politics in particular is madness as the minutes tick down till the moment – in just 30 days’ time – when in all probability this country will commit the suicide of leaving the European Union. And a very slow painful suicide it is, with the two main political parties themselves seemingly in death agonies, torn apart by the question, and by strife and extremism. Is it wrong to pray about politics? Wrong to beg that some way should be found to stop the lunacy? I don’t think so, when so many people will be the poorer for it, our whole nation lessened, isolated, cut off from the richness which is a common European heritage. It is not all about trade and deals; it is about a way of being, cultural, historic, spiritual. Quite simply, we are better together.

However, the glories of this too-early spring have provided – if not compensation – at least distraction. 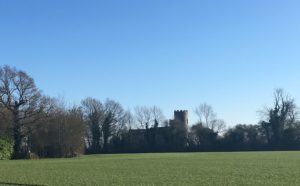 In fine weather there is no lovelier place on earth than Suffolk. The dog and I are extending our walks, and we have been exploring the Saints Country. This is a grouping of villages on the Suffolk side of the Norfolk-Suffolk border, the South Elmhams.  In the 1096 Domesday survey the manor of South Elmham was held by the bishop of Thetford, and then purchased by Herbert de Losinga, bishop of Norwich, who owned a similar manor at North Elmham in Norfolk. The villages are All Saints South Elmham, St Cross, St James, St Margaret, St Mary (Homersfield), St Michael, St Nicholas and St Peter. Add to these the Ilketshall Saints – Andrew, John, Lawrence and Margaret – and you have a litany of medieval devotion.

When I first came to this part of Suffolk in the early 1970s you could drive round and round the web of roads through the Saints country and never find your way out, often ending up where you started – unless you were fortunate enough to find an amused and slightly scornful old Suffolk “boy”, who could give directions.

One warm and sunny afternoon the dog and I started from Metfield and our eight-mile loop took us through the parishes of St Cross, St Nicholas, All Saints, and St James on a wonderful well-signed, and now dry, network of paths across country. We went to explore the church of All Saints, standing alone in a field. 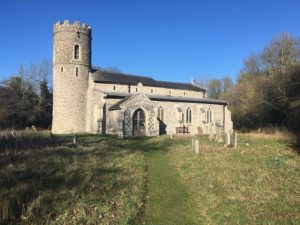 It is one of some 38 round tower churches in Suffolk (they are mostly in East Anglia). There are various theories as to why they predominate in this region. They mainly originated in Anglo-Saxon times, and may have first been defensive structures against the Vikings, with church buildings added later. In this area without natural stone churches are built of knapped flint which makes 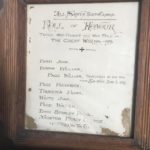 corners difficult. Or it may be because King Athelstan decreed in 937 that the land of every thane should have a bell tower.

The church was open. Where many places of worship have prominent and presumably expensive memorials to the war dead, here we found this rather poignant scroll. It was obviously not a parish of the well-heeled.

In this “summer” in February every morning has been a joy. The trees, still starkly skeletal, stand out against the dawn, sometimes gauzy through a haze of morning mist, the ghost of a gibbous moon sailing high through the western sky. 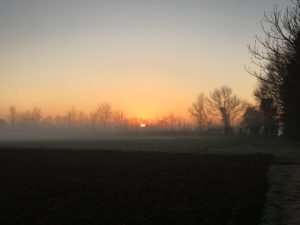 Birds are now singing in surround sound: the raucous thrush, the melodic blackbird, the insistent great tit, and a host of small native birds fill the air. There is a little aria from a pastoral opera by Vivaldi  in which the orchestral introduction seems to mimic exactly the sound of birdsong on a spring morning. All too soon we shall be used to this chorus and it will be mere background, but for the moment it is joyous. Joyous too during the day is the constant high note of many larks invisible way, way above the fields.

That is, when there are no bird scarers in the vicinity. I accept their necessity when pigeons can destroy a field of rape in an hour or so, but farmers rarely obey the NFU code: “Never use auditory scarers before sunrise or after sunset.” What a joke – they are going strong, banging and booming, soon after 6am. “Avoid positioning auditory scarers adjacent to rights of way.” Ditto. They scare me, let alone the birds. I walk past, fingers in ears, and I am sure the split-second surge of adrenaline could trigger an attack in someone with what is called a “weak heart.” It is tempting, when they are next to a path, to go and turn off  the gas bottle. 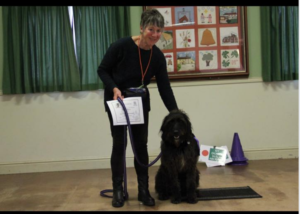 Farmers could do worse than employ my dog. Fields of rape hold tempting olfactory delights for her, and she gallops across them at full velocity, sending up clouds of pigeons – and many a pheasant. I never cease to wonder at her docility to obedience training and the performance of exercises and challenges off-lead (hence the certificate and rosette), yet her utter deafness to any command or blast on the whistle when she is the other side of a field on a scent.

I do not really approve of taking a car somewhere just to walk a dog. However, one blue and gold morning with the crunch of frost under foot was irresistible. We drove to Eastbridge early, and walked solitary to the sea at Minsmere and back through the dappled birch woods.

Solitary meant for a frustration-free outing. All too often in the vicinity of the RSPB Bird Reserve an amble of elderly and slow bird-watchers appears, and I stop with the dog on the lead to let them past (surprisingly, some people do not appreciate being embraced by a large, hairy and usually muddy monster). They advance towards us at snail’s pace and stop, blocking our way, just before they get to us, to peer at the sky with binoculars. We wait. And we wait some more. Eventually they move off, having gazed at length on some avian wonder, still oblivious to our presence.

All this visual and aural beauty is a far cry from what I left behind in Calais when I returned earlier in the month. In the week I was there snow fell, there were sub-zero temperatures, then the snow melted, giving way to rain and gales. That week there was a marked by a sharp increase in evictions and clearances, despite the freezing weather. Calais is becoming fortified against invasion, with so much now walled in protective concrete or fenced off with razor wire. It is a problem that no-one seems to have the will to resolve. What is the future for these people who will continue to make the perilous journey to the hell that is winter in Fortress Calais? 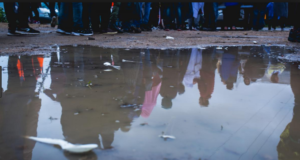 And so to March, and meteorological spring. True to form (“New month, new weather”) this spell of summer is ending, and we shall be back to rain and gales. I shall end the month of March by walking across Sicily, God willing, and so the next publication of this chronicle may be delayed a while. I expect you’ll survive the wait. 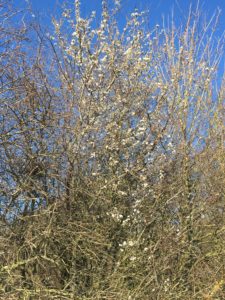