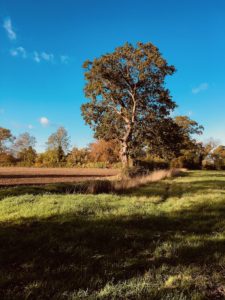 Five o’clock in the afternoon, and the darkness walls us in. Meteorologically it is autumn, but we have had the first frost, and the changing of the hour always signals the start of the slow slide into winter. 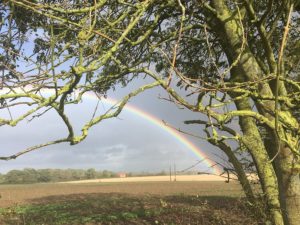 I have learned another new word: “Noachic”…you’ll see why in a moment. October has been supremely autumnal this year. I have written before that nature always seems to make up for times of drought, and we had been short of rain for a good 18 months. The first day of the month brought a positively Biblical downpour, but it soon soaked away as the water table was so low. But it was five days later that the rain became Noachic – or, as I might have said, diluvian. All that Sunday torrential rain fell; friends’ garages, gardens and outhouses were flooded, and the water in my flooded drive (something I had not seen since April of last year) was lapping at the front door.

Fortunately, the horses had been taken off the Common the day before the deluge, a week earlier than usual. Now the Common is vast, empty, barer and bigger now they are gone.

The rain has continued through the month, and gradually ditches and ponds began to fill, streams started to trickle then run faster. Our walks are slowed by mud. The extreme wet but warm conditions have brought out a flourish of funghi. The frost came near the end of the month. Order is re-established. 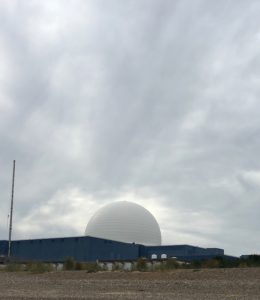 For me, it has been a month of more than usual gadding about (I am a lover of staying put – unless it’s off for adventure abroad). Meetings in London, meetings here, meetings there. On my way to one  I walked the dog along the beach at Sizewell. The great dome of the nuclear power station dominates, shining, sinister and alien. I should say power stations, by this tiny fishing village and its shingle shore. The old Sizewell A from the 1960s with its two magnox reactors is in the process of being decommissioned. My brother-in-law from New Zealand was part of the engineering team, and when he visited in 1986 we had to drive over so he could see it was still in order. A previous owner of my current house also worked on the construction, and was – allegedly – somewhat light-fingered. I’m told the police raided and removed all sorts of items taken from the site. Why would he want them? He built a ramshackle shed in the garden from materials he had pinched. It didn’t glow in the dark, however.

Sizewell B is a pressurised water reactor, and came on stream in 1995. A new twin reactor, Sizewell C, is planned…eliciting spirited resistance from villages on the route to the shore, fearing the passage of 600 lorries a day. It is certain the construction would affect the nature reserves of Minsmere and Dunwich. Stage 4 of the public consultation has now finished. How to weigh up the benefits of non-carbon-generated fuel with the destruction of these habitats?

When my children were small we would swim at Sizewell. The water was warmer there.

The same week saw me invited to an Ed Sheeran exhibition and then the theatre in Ipswich. I am not quite like the judge who supposedly asked “Who are the Beatles?”. I have heard of Ed Sheeran (two of his albums are in the list of the best-selling UK albums of all time) , but I was unaware that this Suffolk boy was such a creative talent from a tender age, and in visual arts as well as music. His drive to write and perform, and his courage (busking in London and Ireland at age 14) were impressive. But the reason I wanted to see the exhibition was the portrait – and oil sketches – of Sheeran by Northern Ireland artist Colin Davidson. They were powerful pieces of work done with great sensitivity.

On the day there was to be the great anti-Brexit march in London (at least a million on the streets) I was on my way to Santiago de Compostela. Driving to Stansted I was listening to the news and comments with my heart in my mouth, for the Commons were to sit on a Saturday (for the first time since the Falklands conflict in 1982) to debate Johnson’s Withdrawal Agreement Bill, and – had it passed – we’d have been on our way out of the European Union. And if it hadn’t…we’d have been out without a deal. I found myself emotional and tearful at the enormity of what was to happen that day, and I nearly, so nearly, drove on past Stansted towards London, because the most important thing seemed then to go and march, and shout at the deaf ears of the Government.

But I didn’t. I was sent reports and pictures of the demonstration in real time. “Epic,” my daughter said. But I am left wondering if it was all too British and polite and middle class and humorous to be taken seriously. When voices are not heard does change not sometimes call for more forceful methods? The peace processes in South Africa, Northern Ireland, and even women’s suffrage would not have come about without violence. I don’t know…turning the other cheek cannot be right in the face of injustice or oppression. Or governmental malpractice and lies. 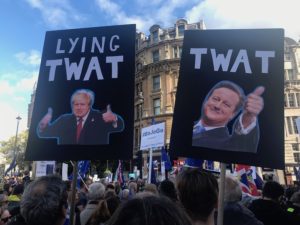 But of course I went  on to Santiago, where I was treated like royalty. My host, who had commissioned the Pilgrim Diptych, was the most welcoming, courteous and generous of men, and I also had the honour of meeting the subject of a previous commission: 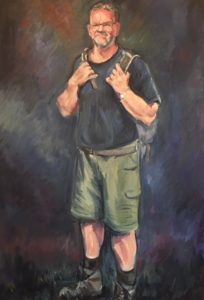 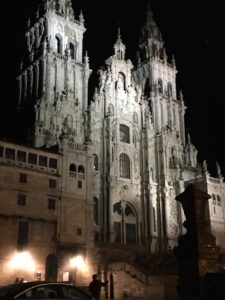 Arriving in Santiago was like coming home, so familiar is it as the endpoint of many Caminos. As I returned to my hotel the first evening after a stupendous dinner, the rain-washed streets glistened as I crossed the Praza do Obradoiro and walked under the arch where so many joyful pilgrims catch their first glimpse of journey’s end. It is a place that pulls the pilgrim back year after year, a place which we endure pain and hardship to reach. If a pilgrimage is a metaphor for life, with its joys and sorrows, ups and downs, encounters and losses, then arriving in Santiago is surely like being welcomed in heaven.

And I came home feeling healed and whole from having been treated with such respect and love.

While there, I managed a day’s walking, to remind myself of Galicia:

So…I write this on 31 October, the day so long dreaded when we would, in the words of our blustering prime minister of mendacity, leave the European Union “No ifs, no buts. Do or die.” If we did not, he said, he would rather die in a ditch. Neither has happened. I breathe a temporary sigh of relief that we remain – for now, tempered  by rising anxiety about the result of the election announced for 12 December. As with every twist and turn of this so polite civil war it is impossible to call what will happen.

I leave you, on this 31 October, with an apt image. 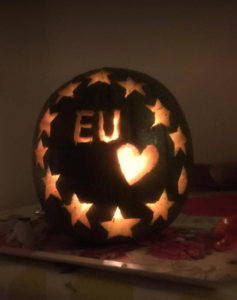