A heatwave! We have had a heatwave, which came suddenly and fiercely after a gloomy, dark month.  As is usual in a British summer it has been short-lived, but it has been intense, ending in spectacular storms and lightning displays and crashes which shook the house – and the inevitable power cuts. And rain, a great deal of rain…and back to chilly grey and dark skies. 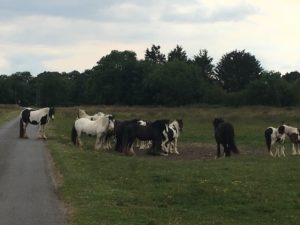 In a heatwave time seems to slow, expand, hang in the hot air. The heat was a furnace, consuming all energy and purpose, turning projects and plans to the ashes of inertia. The dog pants in the shade. My studio was too hot in the afternoons for painting. As I drove home one late afternoon the temperature was above 35C.

When I lived in France this was normal in summer. I was writing books during those years, and worked at night when it was cooler, my sweat pouring onto the keyboard. Every hour or so I would go and swim in the dark to lower my body temperature. The water was warm and silky, and bats swooped to drink from the pool.

There are bats here too, emerging from my attic on summer nights through a tiny gap in the bricks to flit over my head as the dog and I go out at dusk. 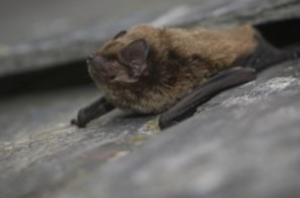 These are pipistrelles (pipistrellus pipistrellus), the smallest and most common of bats in this country. They weigh a few grams and would fit into a matchbox. Despite their ubiquity they are protected. Some years ago I was having work done to the soffit and fascia of the front of my house. The workmen found a dead bat. Tools were downed; urgent phone calls were made; work stopped. Natural England sent experts, and batwoman spent a morning climbing and crawling round the attic. Fortunately it was just too early in the year for the bats to have left the nursery, and work was permitted to continue, with the proviso that the gap in the brickwork must be left.

I – in common with many a churchwarden of a country church – could wish they were not protected. I don’t want them in my attic, or in the bedrooms where they occasionally intrude. I have cleaned churches on many occasions, and in summer the mess and smell are  horrible. Take a newspaper to spread on your pew if you want to sit down in church! Sometimes during concerts in rural churches the resonance and vibration of the music can disorient the resident bats to such a degree that they fly out of their roosts to dive-bomb the audience. 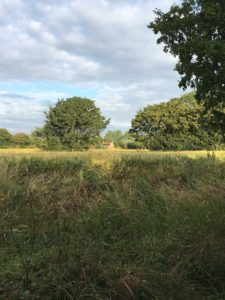 The difficulties of interfacing – living – with wildlife in the country are legion. Yet again a fox got my chickens – six of them, leaving just four poor traumatised birds. Six! The hens had been shut in their run for two months while I considered it unsafe, for hungry vixens with cubs are bold hunters. I had just liberated them a few days before. That day I had finished an important piece of work, and gave myself up to the pleasures of gardening, and then rewarded myself by going indoors to watch Federer play Nadal. And the cunning of the foxes was such that in those couple of hours the six chickens were taken.  Renard must have been watching all the time, waiting for a chance, maybe teaching the growing cubs to hunt. I will not allow my flock to range again. These birds were under my care, part of my household, my responsibility – my economy, in the true sense of the word. It hurts.

In the heat the dog and I walk even earlier, out well before six, though the heat is building by our return after seven. Even in more normal conditions she finds the summer too warm, and we seek shade for the second walk of the day. In the absence of woodland, this is often to be found in green lanes, the ancient byways and paths connecting villages and settlements. There is one a stone’s throw from my house: Tongs Lane. 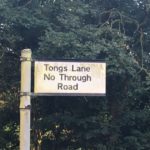 At its northern end it is a continuation of a Roman road, but then winds and wiggles, and does not quite join up with the road as it drives straight as an arrow’s flight due south east towards Heveningham and Peasenhall, a line which would take it to the sea at Aldeburgh. The origin of the name Tongs is not certain. In other regions it is taken to mean a “tongue” of ground between two rivers; or it could be there was someone in Saxon times whose name became corrupted to Tong. Near it there is Spong Lane, but a spong in Suffolk is a narrow strip of land.

These smaller Roman roads appear and disappear as they criss-cross the land, but their broken line and direction can usually be traced with a ruler on a map. I always thought the lost sections were because in post-Roman Britain farms and villages grew up and the road was diverted to take these in. But I now believe it is that the ghosts of these roads survive on the more marginal clay upland soils, and not in the more fertile valleys, where continuity of arable husbandry has ploughed away all trace of them.

Where the minor Roman roads remain in this way on the claylands they are often associated with other ancient features, particularly clay commons and parish boundaries. The curving arcs formed by the boundaries of these commons extend over the same general area of clayland spanned by the Roman road, and – like it – they too tend to fade away on the better soils and valley gravels. This is certainly true in the immediate area where I live, with the four clay-dominated “greens” which make up my village (Bell Green, North Green, Swan Green, and Silverleys Green), Hussey Green, and “my” own common of which I so often write – Chippenhall Green. All of them within site of the Roman road.

When I first moved to my present house, and discovered Tongs Lane, I imagined Roman legionaries marching along it. I dug deep into my six-decade-old school Latin to converse with them. Today I have cheated and consulted the Classicists of my family to bring a correct version of my opening line: “Cum hic habitabas, erant plures silvae et agri rariores.” Did they reply? Rarely, for their on-road march velocity was in the range 2.85 to 3.0mph or 4.59kph to 4.83kph, and carrying up to 40kg. Sometimes, in the shadows of the lane, the dog stops and stares, utterly still. What is it she sees? The shade of a soldier? A merchant coming from the coast with goods from the Mediterranean?

Another favourite bridleway of ours, if we’re driving home from Bungay, is in the Saints country (see February 2019), and leads from the village of Ilketshall St Margaret almost due north to Bungay. It is called Shoedevil Lane.

I cannot find the likely origin of the name. There is an online reference to some expert leading a walk along it, and opining on the origin, but his theories, frustratingly, get no mention. It is a glorious walk high over farmland and descending to the Waveney Valley. Tongs, Spong, Shoedevil, Deadman’s …lost history which speaks of our ancestors’ lives, preoccupations and fears.

On a rainy Saturday early in the month I apprehensively took some entries to the Flower and Produce Show in a nearby village. 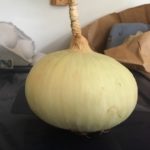 I learned to “dress” my onions for showing as all the old Suffolk “boys” do, and was rewarded with a first for these, and first for my (pre-fox) eggs, and my roses (stiff competition there), and a second for lettuce. Less glorious were my unplaced cheese scones, marmalade, and (crushingly) a landscape painting of the Waveney Valley at Syleham. I imagine the schadenfreude of members of the local art group, also competing. 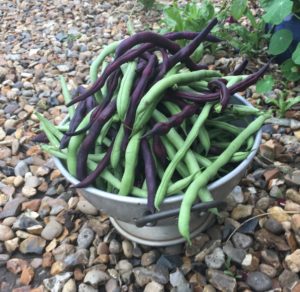 I don’t mind too much, for I have had painting commissions recently, so some must 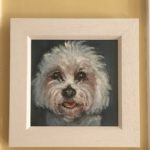 like my work. One I found difficult in the extreme, for I do not usually work solely from photos. An online acqaintance, who lives in Spain and who has previously commissioned from me, asked me to do a picture of a miniature Bichon Frisé, belonging to a friend whose 50th birthday he was going to attend in London. I have to admit that when I first saw the photos I thought the animal was a fluffy toy. It was completed by the deadline, but with a struggle. I relate more to larger dogs.

But then a magnificent challenge: a commission to paint a diptych, two panels 80 x 100cm, to symbolise pilgrimage. This will hang in Santiago de Compostela (if approved). It is exhilarating, exciting, to allow my imagination full rein while at the same time drawing on my own experience and faith and cultural background. Despite the suffocation of the studio in this weather I race over there, eager and immediately absorbed. And happy. The commissioner is someone well known in the world of European pilgrimage in the 21st century. I am honoured indeed, and hope I will justify the confidence shown in me. Inside me self-doubt and self-belief are at war. Watch this space.

Last month I showed some pictures of the beauty of June flowers in my garden. Here are some to demonstrate that nature in the wild can rival horticulture.

For the third consecutive month I chronicle a farmer’s further attempts to keep the unauthorised away from his fishing lake:

Imperceptibly over the month silence has come to accompany our morning walks. The jubilance of spring and early summer birdsong is no more. There may be a yellowhammer (little-bit-of-bread-and-no-cheeeeese), the cawing of a rook, or the cooing of a pigeon ( a better onomatopoeia – roucoulement – in French), or the menacing mew of a hunting buzzard, but generally there is silence. Silent too is my house now family have departed; the young people with their mix of chirpiness and grumpiness missed by both dog and me.

Harvest was well under way when interrupted by the storms and downpours. The roar of combines and the thunder of huge hurtling tractors along the lane goes on long into the night. But now the dog, long constrained by standing crops and paths choked with weed, can bound free over golden stubble. She leaps the heaped rows of straw, just as she jumps the waves at the beach. To watch her is to find oneself smiling at the sheer joie de vivre. But maybe that is an anthropomorphism too far. 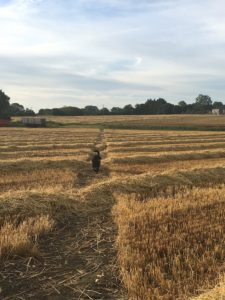 And so the year sinks inexorably towards the beginning of its end. Next month will see the first small tinges of autumn, a hint of the sadness to come in the dark months. But not yet.