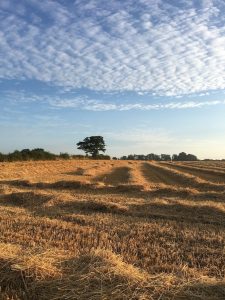 At the end of my July offering I was debating whether to continue with these chronicles, as the year had come full circle since I initiated the blog. There was a positive response, and so here is August.

I could not have imagined, when last month I wrote of the first rain in months, that there would be precious little more for another month. As August ripened the heat built and built once more, this time with sapping humidity. And so it continued till a few days ago. Now another couple of rainy days have seen the grass (and weeds) spring up, and the stubble fields are covered with a sheen of green where fallen grain has germinated. 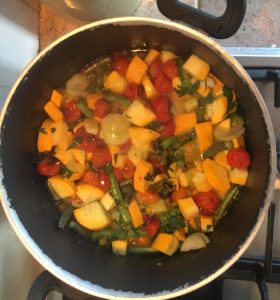 But what a summer! My two fig trees are bowed down with ripe and luscious fruit. In previous years the birds and wasps had the sparse fruits as soon as they softened. Outdoor tomatoes, even the Italian ones sown in hope rather than expectation, have produced a glut. Harvest is over and all safely gathered in, and the landscape assumes its autumnal aspect as the plough get to work through the dry earth. My own domestic harvest threatens to overwhelm me, and processing of tomatoes and courgettes demands constant attention. I press gifts of vegetables onto friends and family.

Drought has produced a premature autumn, and hips and haws glow red in the hedgerows. Blackberries are ripe and plump – how have they found enough moisture?

However, most arable farmers are speaking of a reduced yield this year, though one organic farmer of my acquaintance in Lincolnshire says his has increased. Those who use the old varieties say so as well. Lessons to be learned.

Now, at the end of August, on the cusp of meteorological autumn, the sun has yet to breast  the horizon when we go out for the early walk. 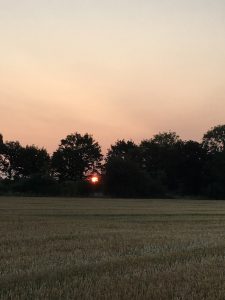 Now even the yellowhammers are silent, and hunting buzzards are the only birds I hear. Sometimes a great grey heron rises with its slow wingbeat from a pond. One day we come across a baby barn owl sitting under a tree, a ball of grey fluff surrounding an improbably stern owlish face. I hold the dog still. Too young for full fledging, he must have flapped down from the nest but couldn’t fly up again. I don’t think he will have lasted long. Another morning we startle a large dog fox. My young dog pursues, then wisely she thinks better of it, and the fox slinks away. 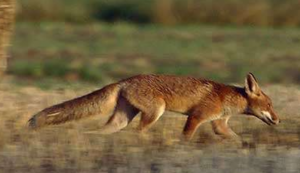 Early in the month, on a blazing day, I went to help set up the Inspired by Becker Exhibition (the regular reader will recall that back in April I was accepted by this art society, dedicated to raising awareness of Harry Becker’s work within the art world and among the general public, and to running events which celebrate his contribution to painting and printmaking in the early years of the 20th century). I also, with some daring – since I am but a self-taught amateur, entered the Paint Out competition on the Saturday of the exhibition. This was held at Blythburgh, where Becker is buried. Some artists chose to paint the marsh landscape of the Blyth estuary, some to paint the church and churchyard, and three or four of us to try and capture the working party clearing the artist’s grave. 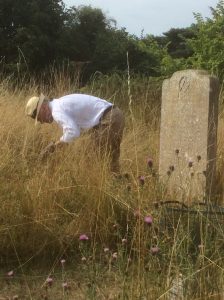 I reproduce here first, second and third – and my own. I thought the third-placed one (the pencil drawing) should have won. But what do I know? 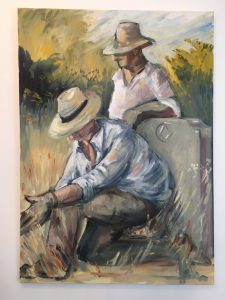 I cannot help but write this month of the IICSA (Independent Inquiry into Child Sexual Abuse) report on the case study of the English Benedictine Congregation, and particularly their abbeys and schools at Ampleforth and Downside. I had thought myself unshockable, but the appalling repetitive catalogue of depravity, predation and cruelty in the report caused me to reel psychologically.

The report highlights how time and again the attitude of former Abbots of Downside (one of whom is our parish priest, for Downside has served the parish in which I attend Mass since 1657) sought to protect the reputation of the monks and the school, sought to protect the offenders, and failed to honour their duty of care to the victims. “Through ignorance, through weakness, through [their] own deliberate fault”… I see only too well how the weakness of our priest, who flees from confrontation, head in sand, and the naïveté of another (who also was priest in this parish) could allow the darkness to continue. 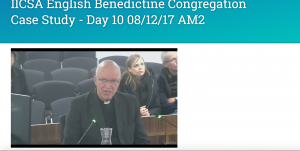 I requested some sort of statement from our priest for our parish website, of which I am an admin. “No comments; no statement,” came the reply. But then when Downside issued a statement I persuaded him to allow me to post it online, and put a hard copy on the noticeboards. After Mass he stood up and said these were available to read, but then spoke of his own stress, with not one word of regret, contrition, or owning the situation. There was much anger and upset among the faithful, and eventually he was persuaded to make his own statement of regret. It cannot have been easy for him, and he did it in a toneless, emotionless voice.

The report suggests that there is still “an entrenched belief that the clergy are superior to the laity.” I see it every day in our parish. And we the laity allow it to continue…“Father” knows best; Father must be supported whatever; Father must not be questioned or confronted. What one commentator calls the infantilisation of the laity. And so we must share responsibility for these abuses of power, through ignorance, through weakness, through our own deliberate fault. 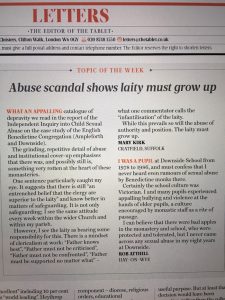 And the knowledge of how the clergy have abused their position keeps flooding in – the United States, Ireland, Australia, Scotland, England. Maybe, just maybe, this is the beginning of a shift of the tectonic plates in the Church, a new reformation – if only the laity can grow up. I wrote to The Tablet, and support flooded in from all over the world.

End of sermon. The readers who said “Continue” may be regretting their encouragement… And yet abuse of power concerns all the human family, Catholic or not.

But speaking -more cheerfully – of families, August has been a time of visits. One weekend to Northern Ireland to see elder daughter, her husband and their two girls. Lovely girls, growing up fast: one embarking on GCSE, the other about to spend her first day at “big” school. They are a pleasure to be with.

The next weekend, younger daughter comes from London, and spoils her old mother with breakfast in bed. We walk a long loop of 11+ miles: Cratfield, Linstead, Cookley, Huntingfield (sandwich and a pint of Adnams in the Huntingfield Arms) and home via Cratfield, after a scary encounter with the most aggressive horse I’ve ever had to face.

This is the longest walk since my doubly-fractured ankle, and although the last mile or so were painful, it set me thinking of more serious long-distance walking. Next month, in Cornwall with the young dog, I can test myself on some proper gradients. 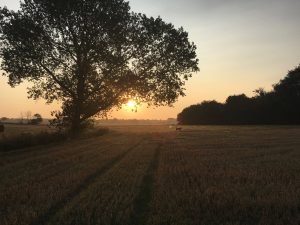