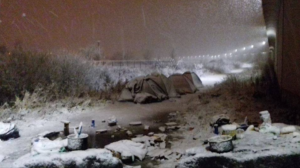 ‘January’ is being written in Calais, where it is cold and life is grim for the migrants. The reader will forgive me for writing of the situation here first, for it cannot but be uppermost in my mind. And if I get on a virtual soapbox, it is because there is a humanitarian tragedy in play here. For the safe and gentle Suffolk news and views you must wait – or skip – to the end.

Currently there are around 500 “exilés” (so named as to avoid any contention over the definition of “migrant” or “refugee”) in Calais itself, but probably a thousand or so spread along the coast between Calais and Dunkerque. In the two or three days I have been here there has been deep frost, snow, mud, rain and gales. 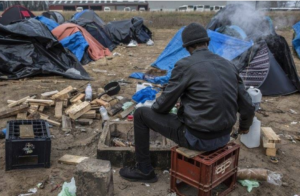 The stress the weather causes to those who are living rough is equalled and compounded by official policy: there has been an increase this month in the clearances (a word which should give some cause for thought to those of us born in the first half of the 20th century) – the dismantling and destruction of tents, sleeping bags and personal possessions, often with violence. Young Eritreans and Ethiopians sleeping under a particular bridge for shelter have had their belongings destroyed, and a three-metre wall has quickly sprung up near a service station. Walls, fences, barbed wire, CCTV, drones, dog patrols, violence, tear gas, the persistent dehumanising of those who seek refuge…Donald Trump could learn from this. 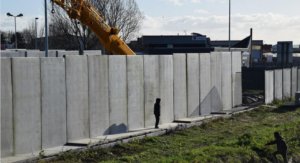 And who, dear reader, pays for this? If the British public are scarcely aware of what goes on here, then they are probably even more in ignorance of a new cooperation deal on 24 January under which the UK will pay the French government £6 million to support its plan of tightening border controls in France. Just over half of the investment will come from the £44.5 million already allocated under the Sandhurst Treaty on UK-France cooperation signed by Prime Minister Theresa May and President Macron in January 2018. However, an additional £3.2 million of new funding will be given for equipment and measures to combat migrants using small boats including CCTV, night-vision goggles and number plate recognition technology. Moreover, foot patrol across beaches and coastal areas in France as well as air and boat patrols in the channel will be reinforced. At night here, by the beach, I hear helicopters.

This new round of measures will make it difficult for people to make crossings in the future, which can in turn lead to more dangerous attempts by refugees to reach UK given their precarious living conditions in Calais. 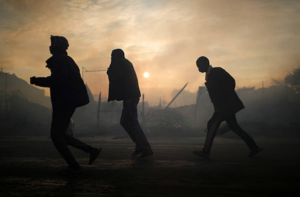 Compatriots, when you pay your taxes, spare a thought for your cold, starving, exhausted fellow human beings who are hounded and harassed to prevent them setting foot in our country.

Whatever people’s views on admittance to the UK it cannot and must not be denied that these people are human beings, forced to live like animals, herded up, moved on, burying their meagre possessions to prevent their being destroyed.

And so, here in freezing Calais, Help Refugees, the Auberge des Migrants, the Refugee Community Kitchen, Refugee Youth Action, the Info Bus, and other aid organizations work every day to bring warmth, clothing, bedding, wood, food and information to those whose journey across continents has been forced to end here. I am here for a week, and the intense cold of working conditions – which for a while yesterday I thought I could no longer bear – makes me realise that, whereas my working day will end with the warmth of my paid-for accommodation, there are many for whom the pain will not cease.

I came with a car load of material donations from my parish and from the local WI, and €1000+ donated by parishioners, friends and family. If there is a scintilla of hope and joy in all this it is that the Auberge des Migrants functions on cheerful volunteer labour, mostly very young, from all over Europe and the world, but mostly  the UK; many giving up months or even years to do this work. In the darkness and division of an imminent Brexit they are the light of the future. 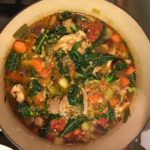 I do not dislike January. It can be drear of course, and at its start I miss that dreamy fallow period between Christmas and New Year, and the house looks dull and dowdy once decorations are removed. But the tangy sweet and bitter aroma of Seville oranges and lemons and sugar bubbling into marmalade compensate for that. Cold weather calls for hearty and healthy food, taking account of a resolution to eat less meat. By the end of the month the birds are singing in the mornings; days are perceptibly longer; the light changes subtly and hints that one day spring may come; there are snowdrops, celandines and maybe even primroses – and there are projects and plans. 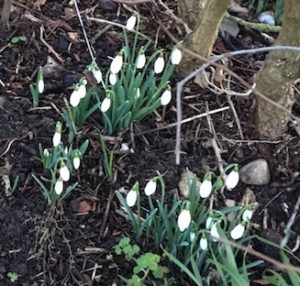 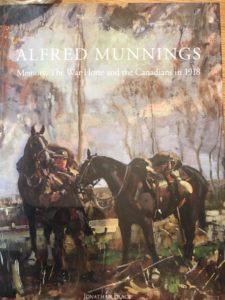 I took advantage of travel expenses to London being paid for a meeting of the media working group of the Confraternity of Pilgrims to Rome to go out to Chelsea and the splendid National Army Museum (which I didn’t know). The reason was an exhibition of Alfred Munnnings’ work as an official war artist commissioned by the Canadian War Memorials Fund. Munnings provides an insight into the men of the Canadian Cavalry Brigade and the Canadian Forestry Corps. His paintings demonstrate both the important role of the cavalry on the Western Front and the vital work behind the lines that sustained the war effort. Munnings’ wartime artwork was pivotal in establishing his success and securing his admittance to the Royal Academy of Arts in 1919. 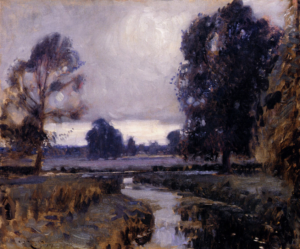 I have to admit that I love Munnings’ work (except the rather “society” pictures of his famous later career). The man was a shit, certainly in his younger life, as his marriage to the disturbed and suicidal Florence Carter-Wood suggests. But he was born at Mendham Mill on the Waveney, four or so miles from where I live, and his early paintings of the Suffolk landscape and the men and horses which laboured there vividly elicit a rather blinkered nostalgia for an era and a county which were never as pretty as he painted them. The work of Harry Becker does much the same in capturing a bygone rural age, but Becker in a simplicity of line and a speed of brush somehow gives the greater reality to the hardships and the toil.

Once again English weather thwarted me of the spectacle of the last total lunar eclipse I am likely to witness, for the next will not be till 2022, and then, falling in May, it will not be visible in the UK at six o’clock in the morning. What I did not see was a rare super blood Wolf Moon. 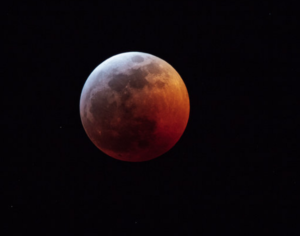 Things looked good for visibility when I went to bed. At 4.30am I got up and went out at the appointed time in an eerie complete darkness. To the south and east the sky was clear, with stars shining; but at the very moment the full eclipse was due and the moon should have turned dark red clouds advanced in the western sky. I saw nothing (again), and went back to bed, grumpy.

These celestial events hold an atavistic attraction for me. There is a primitive awe at what happens in the sky, and I will go short of sleep to watch the fireworks of a meteor shower or a lunar eclipse, even partial. The winter night sky sparkling with huge stars scattered across the frosty air detains me, gawping in wonderment, when the dog and I go out at bedtime. In early 1997 I was living in the deep south of France when I first saw the comet Hale Bopp. Night after night I went out to gaze at it as it hung cradled in a hollow between two hills. 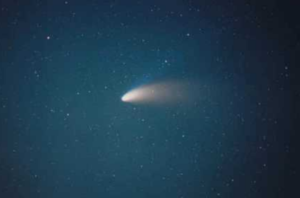 Nowadays we know and understand what causes these phenomena, but it is hard not to attach a mystical significance to them, for to me they are glimpses of the numinous:

The heavens declare the glory of God, the vault of heaven proclaims his handiwork; day discourses of it to day, night to night hands on the knowledge (Ps 19).

From my window in Calais I can see the White Cliffs of Dover. I cannot bear that in less than two months my country will cut itself off from the lifeblood of Europe, and all the richness – cultural, artistic, spiritual, political, economic, financial – that comes from being part of a community. 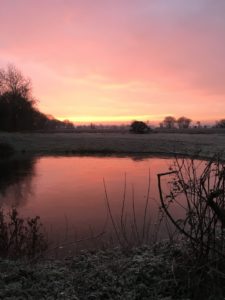