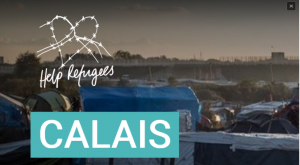 A rainy January evening in Calais. I have temporarily abandoned my common or garden existence in order to come to Calais and work a week with Help Refugees at the Auberge des Migrants, bringing with me a carload of goods donated by my own and a neighbouring parish. What a spotlight that has been on people’s attitudes: many generously bought good quality new items from the “priority needs” list. Others unloaded dirty smelly old tat.

The day of my arrival the police (the CRS, the French riot police 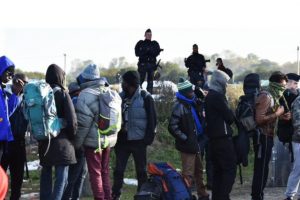 whose brutality I had witnessed several times when I lived in France) had done one of their “clearances ” – the systematic destruction or confiscation of refugees’ belongings, depriving them of any means of shelter against the winter weather. That day’s raid had been more violent than usual, and a teenage migrant had lost an eye when a CS gas canister hit him full in the face. It was one more skirmish in the war of attrition waged by the French authorities and police with the regular use of beatings, CS gas, and pepper spray aimed onto migrants’ clothes, sleeping bags, tents and even water supply, often in the early hours of the morning.

These gross abuses of human rights, in part funded by the British taxpayer, do not remove the migrants from Calais, but they do make their desperate lives a degrading misery.

In his speech in Calais two weeks ago President Macron said that migrants’ illegal camps and squats would no longer be tolerated and that migrants must go to the CAES (Centres d’Accueil), but these do not house or feed them, except in exceptionally cold weather when they open containers. Unfortunately the authorities close these without warning, with migrants’ few belongings lost inside. And despite Macron’s saying that the State would henceforth ensure people are fed, there is no sign of this. He also said police who acted violently and “without respect ” would be punished. Ha! Only nine days later the 15-year-old lost his eye. When he comes out of hospital there is nowhere for him to go; no-one to look after him.

Another result of police action is that Help Refugees and similar organisations have to work doubly hard to replace the goods destroyed. The day I wrote the above there had been a day-long distribution of 360 tents. In the afternoon we were called from our usual jobs of sorting and packaging clothes to help roll, tie, bag and pack 750 blankets. Two days later these had been removed or destroyed again.

Other regular jobs at the Auberge Des Migrants include cooking and distributing as many as 2500 meals a day, cutting and bagging firewood, and the School Bus Project which normally goes on the road twice a day to offer educational facilities . There is also an Info Van where people can charge their mobile phones and get wifi.

But the recent brutal suppressions have meant a great deal of tension, anger and volatility among the migrant communities, and volunteers’ safety can be jeopardised. My own work in the warehouse has no dangers, other than exhaustion, but I see migrants crouching in the scrubby bushes round makeshift fires outside our locked compound.

The displaced people of the world number many million; in Calais the prospect of getting to the UK draws hundreds, sometimes thousands, of them. It is one of the great humanitarian tragedies of our time.

It is all a long way from the tranquility of rural Suffolk.

January has been a miserable month at home, but Calais puts that into perspective. 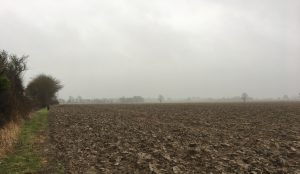 There has been scarce sun, and we have lived in a perpetual sullen twilight punctuated by tremendous storms. The mornings are still dark when I set out with the dog, who detects through her nose all the scents and creatures of the night. All around in the darkness I spot the comforting lights of farmhouses, so many named for – presumably – the trees that grew beside them – Willow, Poplar, Yewtree, Elm, Holly Tree. Some are descriptive of their location – Common Farm, Mill Farm, Rookery, Hall, Church, School, White Post, Spong (which meant a narrow strip of land), or owners long dead – Larter’s, Watson’s, Slade’s, Gissing’s.

But one morning there was a more absolute dark. Winds of nearly 70mph had brought down power lines, and we were without electricity for more than 14 hours. This lack slows down life: candles must be hunted for, lit; fires laid to provide some warmth; water heated. No telephone, no computer, no television. I read by crepuscular candlelight in pre-Victorian gloom. 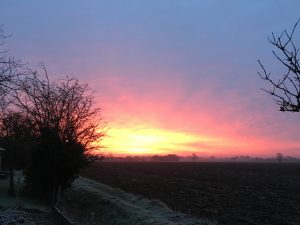 The Common, all but under water, was – for three days – home  to a huge flock of fieldfares. They stood thick on that ground which was unsubmerged, occasionally taking to the wing in a synchronised starling-like murmuration. One day, as the dog and I splashed through the wet, I saw three buzzards fly above the Common, scattering all smaller birds in panic.

Towards the end of the month the light changes, a subtle shift, and a feeling that spring is not the impossibility it seemed at New Year. In the morning a blackbird sings, then a thrush. Snowdrops suddenly are there, green and white among the dead leaves. 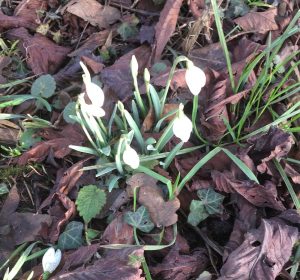 And this intimation that life is coming back stirs a longing in me, that desire to be walking the paths of freedom once more, off on adventure, the challenge of the unknown day:

Afoot and light-hearted I take to the open road,
Healthy, free, the world before me,
The long brown path before me leading wherever I choose.
Henceforth I ask not good-fortune, I myself am good-fortune,
Henceforth I whimper no more, postpone no more, need nothing,
Done with indoor complaints, libraries, querulous criticisms,
Strong and content I travel the open road.
Walt Whitman.

I cannot go. I chose to have my joyous crazy dog instead, but oh, the longing is intense. 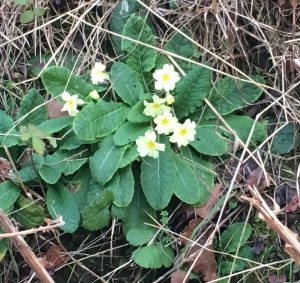