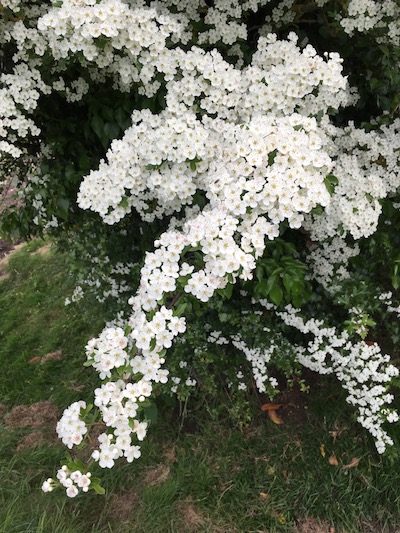 It is the law in England that bank (public) holidays should be cold, windy and extremely wet, with television coverage of deserted seafronts with deckchairs blown across beaches, and giant waves breaking on promenades as the rain spoils days out. The exception to this is Christmas when temperatures rise unseasonably high. But “new month, new weather”, and both the May Day and the (misnamed) Whit holidays saw record high temperatures.

The sun has shone almost all month. The barley, rippling in the breeze like newly unplaited hair, has started to turn colour. The bright acid yellow of rape flowers has faded. 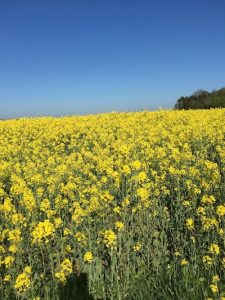 The Common is once more clothed in magic. 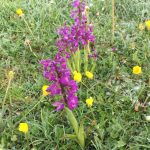 The orchids were a field of magenta mingled with a million buttercups. The horses returned mid month, and the first foal has been born. The blossom has been magnificent this year.  It is as though nature is over-compensating for the months of grey, wet, miserable, cold. 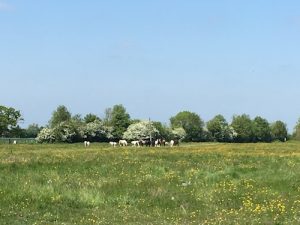 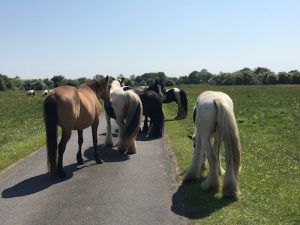 And somehow symbolising this return of hope is the pure exultant song of the larks high high above the fields. An exaltation indeed.

This warm, wonderful weather has been a kind nurse to me this month, encouraging recovery. 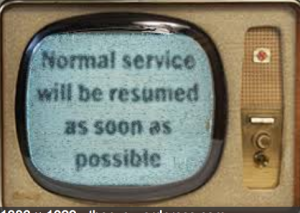 In the old days (when I was young) of television and the “wireless” the announcer would say, in case of a glitch, “Normal service will be resumed as soon as possible.” Normality – in terms of daily activities and routine (which, the reader will recall, tend to centre on the Common and my garden) – has been my aim this month. Normality after weeks of immobility recovering from a double ankle fracture. This means back to long walks, and growing my own food. And full  recovery does not seem the impossibility it was during the dark days. Normal service is on the way back.

The ankle survived a silly setback in the middle of the month. 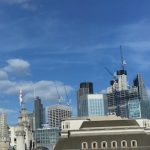 The steering group of the Confraternity of Pilgrims to Rome was to meet in the grandeur of the Guildhall, for our chairman – I am told – is, or was, an alderman of the City of London. I decided I could easily hobble from Liverpool Street Station to Guildhall and back in rush hour without a stick. The unyielding pavements, the crush of commuters, the feeling of vulnerability took their toll, and pain returned. But not for long. The compensation was visiting Guildhall, and the thrilling City skyline from the meeting room.

Often I take the young dog to walk on the vast flat expanse which is Metfield airfield (“RAF” Metfield as it once was). Here the remains of concrete runways make perfect paths for one who is learning to walk unaided again.

The airfield was built for the United States Army Air Forces (USAAF)  as a heavy bomber field. During the Second World War it was known as USAAF Station 366. Metfield was one of the most isolated Eighth Air Force stations in Suffolk, built as a standard, Class-A bomber design airfield, consisting of three intersecting concrete runways. Today it is down to arable cultivation, but the signs of its original use are still there to see.

From here the bombers attacked airfields, bridges, and coastal defences both preceding and during the invasion of Normandy , and strategic objectives in Germany, striking communications centres, oil refineries, storage depots, industrial areas, shipyards, and other targets in such places as Berlin, Hamburg, Kassel, Cologne, Gelsenkirchen, Bielefeld, Hanover,and Magdeburg.  I lived in Metfield for a year once, and on moonlit nights thought of the young men setting out in their machines of death, and felt in my imagination the vibration and roar of the heavy planes as they took off.

One evening in July 1944 the bomb dump at Metfield exploded. One bomb mysteriously detonated,  setting off almost the entire munitions storage area. 1200 tons of high-explosive and incendiary bombs rocked the countryside for miles around. Five men were killed. An elderly farmer of my acquaintance, a nine-year-old lad at the time, living three or four miles off, told me of shattered windows and a barn roof blown off.

Another advantage of walking on the deserted airfield is that, while I am still walking with two trekking poles (and thus cannot easily put the dog on a lead), we meet no-one. In the very early morning, nearer to home, I don’t usually see anyone, but this month had a strange and unsettling encounter. 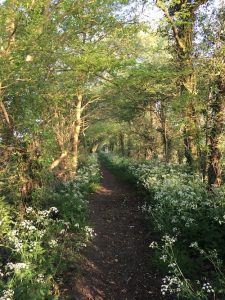 The compassionate reader will understand that traumatic events are closely connected  with strong negative emotions, causing these memories to be powerful and more easily recalled than those of other events. Although a fractured ankle is not high in the hierarchy of trauma, the memory of the accident stays with me, and I feel vulnerable to the point of panic at the thought of a recurrence. One morning I saw the other dog who, with mine, had cannoned into me from behind at such speed that the impact shattered bones and damaged ligaments. I put my dog on the lead and called out to the owner, an elderly woman who – how can I put it kindly – is not known for her rationality, to do the same. She didn’t. I kept asking, and – for whatever reason – she did not respond. As her dog hurtled towards me I screamed. And screamed several times in a terror born of the memory of that winter afternoon that changed my life for the next few months, and possibly more.

Obviously this triggered something in the woman, who came up to me and shook her stick in my face. No dialogue was possible; there was a diatribe:

– My husband will come and haunt you. Look at the end of your bed when it’s dark and he’ll be there
– God will judge you and you’ll go to hell.
-You’re an intellectual nobody

And so it continued as she danced to and fro, shaking her shillelagh in my face as she got near.

Her last two statements may well be true, but I am happy to say that the first was unfounded. I had no glimpse of her husband in my bedroom… But we avoid that path at certain times now.

As one commentator on last month’s blog said, “Who would have dogs, eh?” Well, the answer still is – I would. 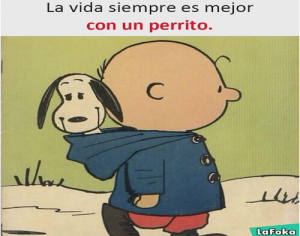