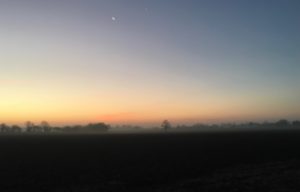 The Solstice has passed, the twin Gods of Christianity and Consumerism have been celebrated. The year is at its darkest, and we are in that unreal period between Christmas and New Year, when normal life – and time – seem suspended. The earth sleeps, and we who have feasted – and imbibed – unwisely slumber replete on sofas in front of bad television. For a few days the rules do not apply: no calculating of calories, counting of units, exercise regime, or chores; and a log fire may be lit early in the afternoon.

I love the dark of the year. The darkness encloses and enfolds, shields and comforts. Rarely this December has it been illuminated by the stars, but on the few cold clear nights the countless scattered jewels across the sky are huge, close enough to reach up and snatch. I go out with the dog at bedtime and see Orion with his belt and sword flashing in the south; the Plough to the north pointing to the Pole Star. Out again in the very early morning, and Venus is immense.

Those early mornings are fully dark when we set out to walk…but how to see a black dog in the dark? The answer – an LED collar. And now I can follow her progress as she races across fields, an eerie light glowing red, moving low and at speed as she hunts. It could give someone quite a turn – Black Shuck in full pursuit, for if you see the devil dog it is said your death will occur before the end of the year. 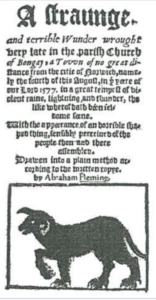 A. Dutt, in his 1901 “Highways & Byways in East Anglia” describes the creature thus: “He takes the form of a huge black dog, and prowls along dark lanes and lonesome field footpaths, where, although his howling makes the hearer’s blood run cold, his footfalls make no sound. You may know him at once, should you see him, by his fiery eye…But such an encounter might bring you the worst of luck. So you will do well to shut your eyes if you hear him howling; shut them even if you are uncertain whether it is the dog fiend or the voice of the wind you hear.”

Shuck is known particularly to frequent my part of Suffolk. On 4 August 1577, at Blythburgh, he is said to have burst in through the doors of Holy Trinity Church to a clap of thunder. He ran up the nave, past a large congregation, killing a man and boy and causing the church steeple to collapse through the roof. As the dog left, he left scorch marks on the north door which can be seen at the church to this day.

On the same day at St Mary’s Church, Bungay, he appeared again: Abraham Fleming wrote at the time in  “A Straunge and Terrible Wunder “: “This black dog, or the divel in such a likenesse (God hee knoweth al who worketh all,) running all along down the body of the church with great swiftnesse, and incredible haste, among the people, in a visible fourm and shape, passed between two persons, as they were kneeling uppon their knees, and occupied in prayer as it seemed, wrung the necks of them bothe at one instant clene backward, in somuch that even at a mome[n]t where they kneeled, they stra[n]gely dyed.”

And, it is said, Shuck is still sighted today.

This December darkness is anything but silent. Owls hoot, vixens scream, muntjac bark, a pheasant – disturbed by the dog – squawks and whirrs. December darkness, book-ended by sunset and sunrise,

the swift time between all too short. December, when autumn finally turns to winter. The last roses, the final fruit; and the last clinging oak leaves brought down by gales. Rain has come at last, and there is some water in the Beck, the ditches and ponds. Not enough, however, and unless the next three months are very wet water will be in short supply next summer. 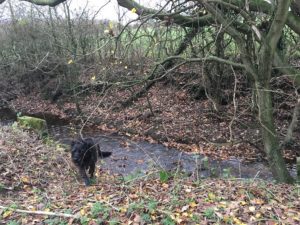 True winter is still to come. Only one or two mornings have sparkled with frost, with the crunch of ice under foot.

One such, happily, was Christmas morning. One of the daughters, the dog and I – free of any obligation – set out for the coast. The wetlands of Minsmere and even the usually sullen North Sea shone sapphire blue, the reed beds pale in the low sun. It was an idyllic Christmas walk. 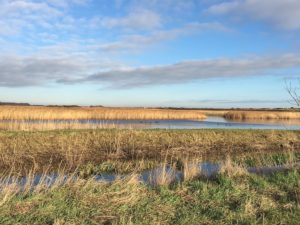 Less idyllic the weather when I visited the other daughter in Northern Ireland: Storm Deirdre lashed the shore with 100kph winds and torrential rain. I was warm and safe in the bosom of my family, amused with Scrabble, jigsaws, much food and drink, and a recital by the violinist granddaughter.

And so the year turns once more. All too soon decorations must be packed away, duties must be resumed, for the feasting is over for another year. Whether it has been the companionship of family or the lights and bustle of the season, but the dark has somehow been healing, and I feel energy seeping back, and the cloud which has stifled me all autumn is lifting.

So here’s to 2019 – though a dire and fearful event is scheduled for 29 March. Perhaps Black Shuck will appear; perhaps the ravens will leave the Tower of London; perhaps King Arthur will arise from his sleep. As our campaign proclaims: Bollocks to Brexit! 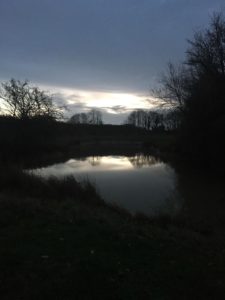