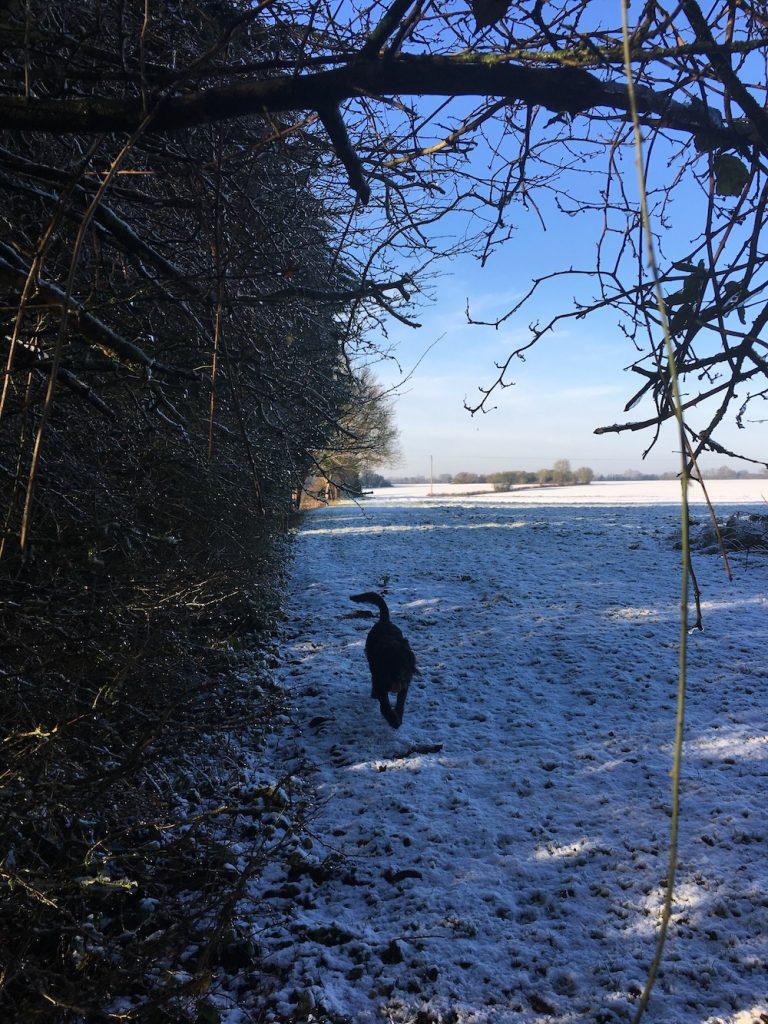 In the deep dark of the year the land sleeps; the garden sleeps; small animals sleep, and even my circadian rhythms respond to this time of hibernation. The Common, 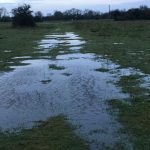 unusually dry for twelve months is, after heavy rain and melted snow, on the way to being a wetland once again. Walking the fields on public rights of way collects kilos of mud on my boots, weighing me down, slipping and sliding; but returning home over the Common provides an ever-deepening boot-wash and clean. As I write, on the final day of 2017, the nearby Waveney Valley has been turned into one long lake from Beccles to Diss. 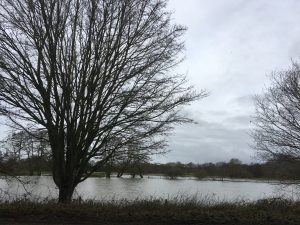 In mid-month there were blizzards and the land became monochrome, blanched of all colour. 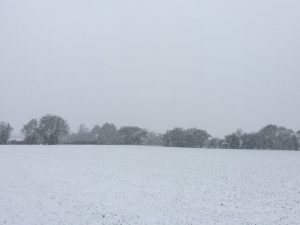 We have had snow, ice, gales, torrential rain and then, suddenly for Christmas, as so many years, temperatures of late spring, mild, soft and gentle. When the family comes for Christmas I need my garage as fridge and larder, but once more Christmas Day was warmer than early June can be.

More than 16 hours of night in each 24. Drear weather and days when gloom never lifted and the day never grew fully light. I love the cheer of the annual festival of light and feasting, even if it seems a million miles from Bethlehem. A nearby village is the very Las Vegas of Christmas, with vying flashing Santas and their reindeer flying across roofs, illuminated blow-up Santas ho-hoing in the gardens, electric Happy Xmases, giant snowmen, and multi-coloured lights twinkling on and off. I offer just one example: 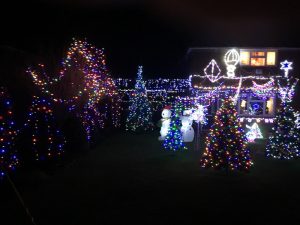 My own efforts are more low-key. 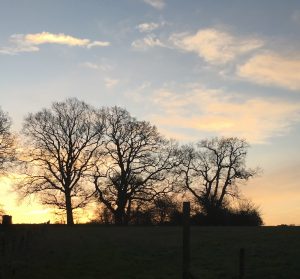 But sometimes there is deep frost, real midwinter weather when the fields are iron-hard and the ice on the puddles crackles under foot, and the world glitters as the sun rises. These are champagne mornings of exhilaration. The dog gallops off, nose to the ground, reading the invisible alphabet of scents and their message. Just occasionally I too catch the reek of fox. Was this the one that made an end of all my hens last May? On less frosty mornings there are tracks – deer, their small muntjac cousins (the enemy of all who grow vegetables), rabbits (ditto), hares, stoats, and … the fox.

The name I gave my young dog when I acquired her nearly a year ago now has got me into trouble. My father’s mother came from the Black Country in Staffordshire, and brought with her dialect words which my father learned. For example, in my early years I was told to go and “wash your donnies”, a word still used in parts of the country for “hands.” When searching for a suitable name for the puppy one of my daughters suggested “Nerker”, for that was the dialect for “mischievous child” – so apposite in this dog’s case. That is what my father called me, and then later my own children. It did not occur to me that it might mean anything else. But it does, and Facebook friends from further afield were not slow in pointing this out when I posted a picture of Nerker on her first birthday. In North America and elsewhere in urban slang it is a variant of the n***** word. Oh dear, and the dog is indeed black as the ace of spades.

What to do? I cannot now rename her, so I must comfort myself that few in this Suffolk backwater will understand as I call out her name.

Early in the month I was preoccupied with the production of the Confraternity of Pilgrims to Rome’s first e-newsletter.

Last March I gave a talk to the AGM of this organization after my own walk from Canterbury to Rome in 2106, and was then rash enough to volunteer to become the editor of its publications, taking over from that great name known to so many walking pilgrims, Alison Raju.

I suggested the Confraternity should start to publish regular electronic updates, as well as produce a printed bulletin annually. Pride dictated that this first effort be a good one, so there was much labouring and sweating over unfamiliar technologies. It was done, despite and not because of British Telecom, who managed to deprive me of broadband for the fifth time since September.

It makes one despair of this country: rubbish broadband if you don’t live in a town; roads and airports unusable after a couple of centimetres of snow; and a bigoted, blinkered 52% who voted to leave the Union which has ensured peace and relative prosperity in Europe for nearly seven decades.

And that last does not fill me with unmitigated hope for 2018. On a personal level there is of course always hope. Dear reader, I wish you a very happy and blessed new year. 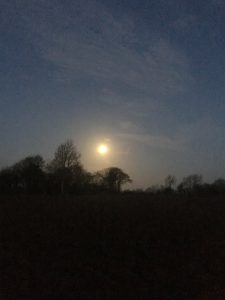