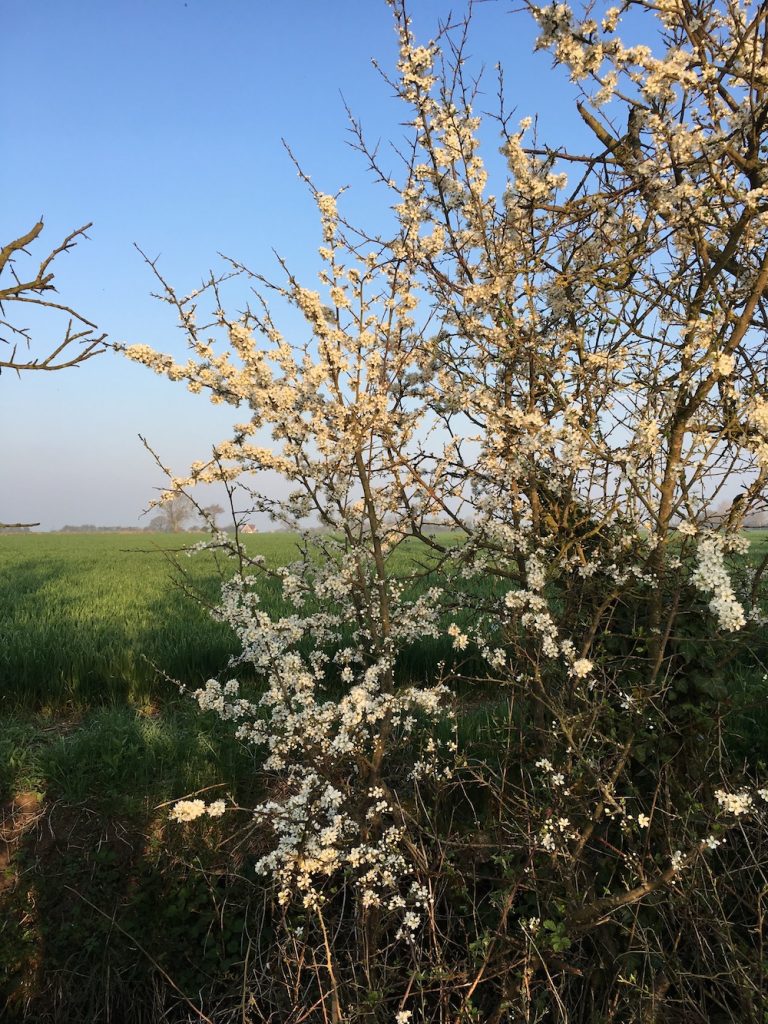 Probably many blogs written about April begin with Eliot:

It’s a bit of a cliché to do so, but in truth this month has not been kind, giving only the briefest glimpse of what might be called spring. Since the new year there have been few exceptions to the dark and drear weather here in East Anglia. Day after day the rain has fallen from a dark, louring, cold sky. One hopes for better of April. The month began, on Easter Day, with a prolonged and chilly downpour. The front garden flooded, the drive was under water and had to be pumped out before deliveries could arrive. April ends, similarly, with temperatures far lower than those of Christmas Day, gale-force winds, and a pitiless constant deluge. April’s new foliage stands out, electric lime green, against the grey.

What keeps us going? What keeps us from despair? Always the hope of better to come. And, mid-month, there was a snatch, a tantalising tease: a few false, fleeting days of spring – of summer, even. The sky was a soft blue, the sun shone from dawn till dusk, near-record temperatures soared. The siren voices whispered, “This is it. This is how it will be. Abandon your fires; abandon your five layers of woollens. Relax the muscles which you tensed against the cold. Here is balm for your body and soul.”

But we were deceived, seduced by amnesia, forgetting briefly that in this country warmth and sunshine rarely perdure, and foolish the person who hopes otherwise. The cold and grey and wet flooded back, and have not relinquished their grip. 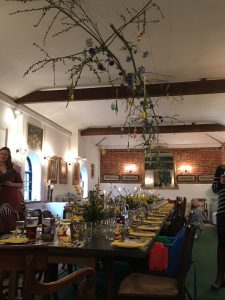 “Come to lunch”, said a friend, “There are one or two coming.” One or two turned out to be 32, a banquet laid out in…their coach house, where they entertain large gatherings, for these are estate-owning, Tory-voting, Brexit-supporting, landed friends. I painted him once, consciously as lord of the manor; the next year I painted his dog, who adopted a similar pose. 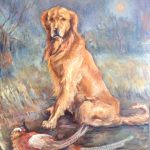 These are good friends, probably the only ones to whose politics I can turn a blind eye. I remember asking them and other friends, including an Irish woman, to supper once. My land-owning friend’s wife was heard to say from one end of the table, in piercing patrician tones, “All immigrants should be sent back to where they came from.” From the other end of the table came a feisty, Irish, response. 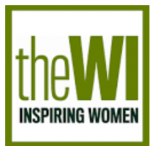 Rather to my surprise, I joined the WI last year, as a result of attending an informed and convincing talk on climate change organized by the local branch. We are a small rural gathering of women who –contrary to the myth – do not spend our lives making jam. Among our number are highly skilled and experienced professional women; the topics for discussion have a bearing not only on our community but on national and international matters.

It was therefore with some trepidation that I accepted an invitation to speak to them. They are a not uncritical audience, and ringing in my ears was their feedback on one of last year’s speakers – an unfortunate woman who would do well not to show her face again…

My subject was “Pilgrimage”. I prepared a PowerPoint slideshow to illustrate the general theme and to demonstrate this with reference to my own walking pilgrimages. The linking of my computer to the projection facilities in the village hall required not a few journeys there and back, and a constant to and fro of orders from Amazon of this connector and that cable and this plug and that socket in response to well-meaning and sometimes misinformed advice. But we got there, and – having spoken of pilgrimage in general, and our hard-wired need to create and visit shrines of various sorts – I shamelessly played for my audience’s admiration with pictures of cramped dormitories, unsavoury washing facilities (a showerhead between two urinals), arid treks through Spain, climbing through snow on the Great St Bernard Pass, and various wildlife – wild boar, snakes, mosquitoes, bedbugs…

But maybe this is all I convinced them of: 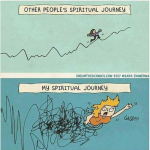 Inspired by Becker
Harry Becker was the son of a German immigrant, born in Colchester in 1865. At 14, his artistic talent being clear to see, he was sent to the Royal Academy of Antwerp for formal training. He finished his education in Paris during which time he was greatly influenced by the Impressionists, in particular Edgar Degas.

From 1886 Becker lived in Colchester where he painted watercolour portraits as well as landscapes in both watercolour and oils. In 1894 he moved to London to open his studio where he became well known for his lithographs and dramatic graphic work. But in 1913 Becker took the decision to shun the commercial art world, and moved with his wife and daughter to Wenhaston in Suffolk (near here), and lived in near poverty till his death in 1928. His pictures of the Suffolk landscape and skies and an agricultural world now lost inspire local artists, and an “Inspired by Becker Art Society” (IBBAS) now flourishes, exhibiting annually in Wenhaston. With some daring (because there is a great gulf fixed between the formally trained and the untrained artist) I applied to join and have been accepted.

In that brief taste of spring, the few sunny days of warmth, buds opened, flowers emerged. A winter landscape of skeletal trees was transformed in what seemed like hours into a dazzling jazzy intensity of green.

I now hobble far enough on my mending ankle to witness the great constellations of primroses on the side of ditches being succeeded by cowslips and oxlips, and the blackthorn come out in bridal finery; to see the sooty black tips of ash twigs  (Tennyson’s “More black than ashbuds in the front of March”) transform within a day into silvery pink flowers.

On one of the few sunny days of the month I was driven to the orthopaedic clinic at the Norfolk and Norwich Hospital, some 30 miles away. This ran with expected efficiency on well-oiled NHS wheels: plaster room – cast cut off; x-ray; orthopaedic registrar…who peered at the x-ray (an armoury of metalwork in the ankle), wiggled the scabby swollen foot, and pronounced me good to go –and my delight was such I barely heard the warning that I was unlikely to get full range of movement back, and that arthritis was a certainty. 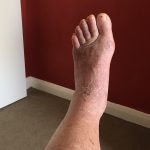 And just as that door to freedom, to walking, and a more normal life opened ajar, the way was barred by a writhing monster of pain. The fracture is healing well, but all the soft tissue damage – the ligaments, tendons and nerves hitherto protected – started to sing out. And they sang loud! I have been reduced to a gibbering, sobbing wreck, and any activity has to be followed by a period of rest with my foot up, waiting for the agony to subside.

As with this spring, one step forward, two steps back. 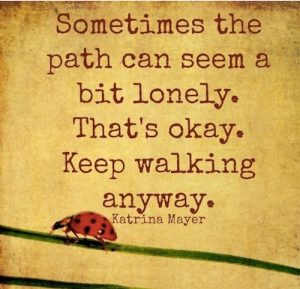