Journey becomes a pilgrimage as we discover, day by day, that the distance traveled is less important than the experience gained. Ernest Kurtz

March’s offering is late, because I am only just now returned from the most recent peregrinations, on foot across Sicily. More of that in a moment.

Once again it was a case of new month, new weather. The exceptional temperatures and deep blue skies of most of February gave way to storms, named storms which swept in from the Atlantic, one after the other, with violent winds, hail, and rain in amounts which helped replenish ditches and ponds still unnaturally dry after drought. The wind gets inside your head, batters your brain, banishes reason, and hurls your thoughts around like flotsam tossed onto a beach. The noise of the trees was like the constant roar of the ocean. Rooks on the wing were flying wild, flung into the chaotic air like so many blackened and charred scraps of paper. 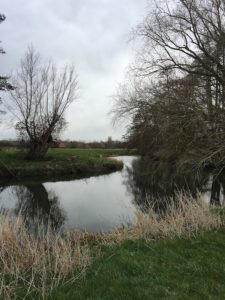 Walking head down hunched into this force demanded energy, resilience. The dog and I sought walks sheltered from the worst of the blast. The lovely Waveney Valley provided some respite. The Waveney, which forms the boundary between Suffolk and Norfolk, is a magical river, quintessentially English in its gentleness, whose beauty – to my mind – rivals that of the Stour in the south of the county. The Stour was the childhood home of Constable; the Waveney, at Mendham Mill, of Munnings, of whom I wrote in January.

The source of the Waveney is a ditch on the road between Redgrave in Suffolk, and South Lopham in Norfolk. When I first came to Suffolk in the 1970s the bridge over the Waveney at Shotford near Harleston was a real frontier. Old Suffolk “boys” would say “Don’t ee cross the turnpike, bor.” Norfolk was not a place to be entered lightly. From its origin the river flows east about 50 miles through Diss and Bungay, and between there and Beccles becomes tidal, and joins the River Yare, reaching the sea at Great Yarmouth. Along its course watermills and windmills trace the rural history of East Anglia.

The Angles Way follows the river, as far as possible, and it was along here the dog and I walked to avoid the worst of the wind. A fox slunk across my path; the dog flushed out a deer; rabbits played. The world seemed at peace there.

The wild weather blew until the day of my departure, and then of course turned fine during the whole of my absence, only to return with me.

I had not done a “long” walk since the Via Francigena from Canterbury to Rome in 2016. Since then I have reached my early 70s, and suffered a doubly-broken ankle with soft tissue damage, and lost all confidence in my physical ability, much more so than such a minor trauma would suggest.

The prospect of a “short” long walk seemed to offer a feasible challenge. The Magna Via Francigena (the Great Route of the Franks) is a relatively unknown 183km trek across Sicily from Palermo in the north to Agrigento in the south. My approach to walking is that of Nietzche, for whom to walk was to overcome – to conquer mountains and oneself, more than that of, say, Wordsworth and the Romantic ramblers of the 19th century. This was something I had to do, to prove that there remained within me some vestige of the woman I once was. 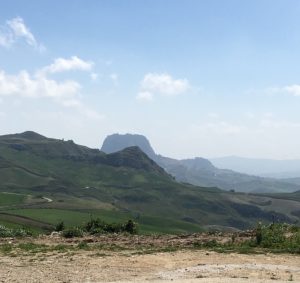 And so off I set. I am not an inexperienced distance hiker, and I hoped no doubt to use that freedom, time and headspace which the solitary walker enjoys to take stock and set myself and my life to rights. “All truly great thoughts are conceived while walking,” said Nietzche in Twilight of the Idols. Was this to be a pilgrimage? I have no particular devotion to the two great Sicilian saints – Calogero and Gerlando, but I hoped to be open to what the journey had to teach me.

And, reader, what it taught me was that living – surviving – in the moment admits of no great thoughts, no spiritual reflection, no meditation on life, the universe and everything. This was tough, demanding, solitary in the extreme, and occasionally potentially dangerous. Not only were the daily totals of ascent and descent steep and relentless (there is no way of training in the flatlands of Suffolk), but a whole day could pass without encountering a house, a car, any sign of human beings, where one slip, one fall could mean injury, or death from hypothermia, bones eaten clean within hours. And exceptional spring rains in Sicily had meant small streams became deep, wide, fast-flowing rivers, fordable in summer, impassable now. 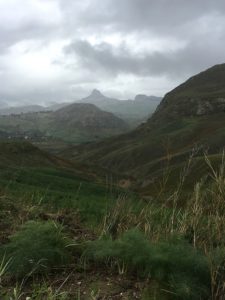 But what I had previously learned on distance walks is to rely on providence – God, if you will. I encountered the first stream in spate on day two. I was not expecting it: the guidebook spoke of a guado (ford). Too wide to jump, and apprehensive prodding from the bank with a hiking pole suggested it was deeper than the pole. And then there appeared one of those guardian angels who materialise at such times, from nowhere, in the shape of a charming young doctor from Pisa. I no longer find it surprising that someone turns up at the precise moment and location of need. In the presence of another person we could both more safely attempt a crossing. So – no doubt to his consternation – the English granny took off her trousers, hitched up her rucksack as high as it would go, and plunged in. The water was icy, brown, fast and strong (without hiking poles I’d have been taken by the current), up to my waist, the footing deep mud. But we made it, and his strong arm pulled me up on the opposite bank. 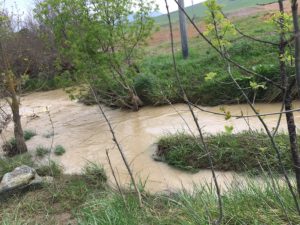 “Should you pass through the waters, I shall be with you; or through rivers, they will not swallow you up.” Isaiah 43, v 2.

His name was Matteo (it should have been Christopher!), and he appeared like the guardian angel he was from time to time during the next week, often at rivers to be forded, or when I was in danger of losing my way, or – because of the mud – in need of encouragement. 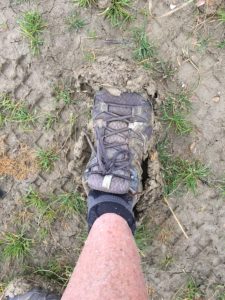 The mud! Mud such as I have never known it, mud into which you sank mid-calf, mud which sucked you down, mud which clung to the feet and legs in such quantities that lifting the foot was impossible. Being stuck to the ground uses muscles, tendons, ligaments not required in daily movement. The strain was intense, progress painfully slow – a kilometre could take an hour.

So again this walk – yes, this pilgrimage – became once more a metaphor for life: the difficulty of forward movement, the obstacles to be overcome, pain, and an absolute need to rely on others, on God, and not on one’s own strength or prowess. Don’t walk along thinking higher thoughts – you’ll only slip up.

That said, it was the most wonderful experience. The beauty of Sicily is wild, intense and compelling. The people kind, warm. And the food. The food! The generosity and abundance of what is (rather condescendingly) called peasant food, food which uses what there is to hand, what can be grown or gathered. It was wonderful.

And so I arrived in Agrigento and became a tourist once more, visiting the Valley of the Temples. And then a train back to Palermo, covering in two hours what had taken me nine days of mud, sweat, toil and tears (and not a little laughter when I walked with my guardian angel) to achieve. 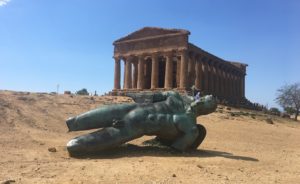 Now back to the safety of Suffolk and its gentler walks carpeted by primroses and flanked by the greening hedges and trees. Back to a reunion with the young dog. And back to try to remember the lessons of experience. 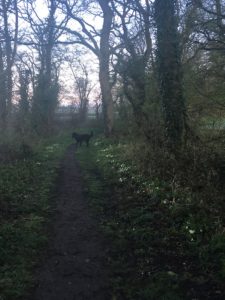