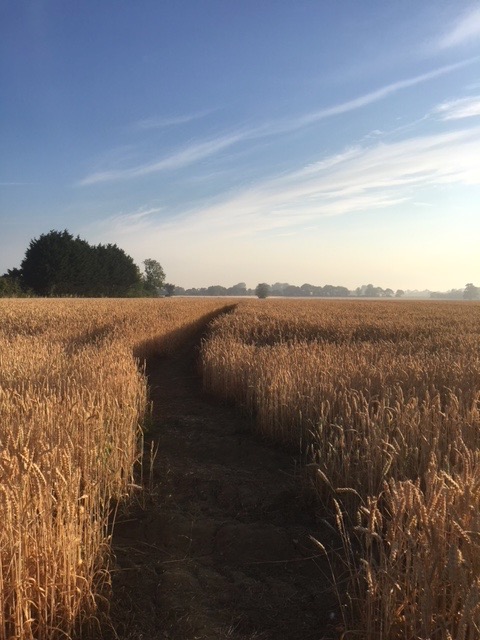 I have learned a new word. This is always a good thing even when it is the younger generation getting one over on me. One of my daughters wrote it to me in an email a few evenings ago. I thought she was just showing off but I gather Twitter was buzzing with it at the time.

The word is “petrichor”. It means the scent given off when rain hits dry ground. This is apparently the effect of a molecule, geosmin, a bacterium produced by Streptomyces, which is released in to the air. The word was coined by scientists Isabel Joy Bear and Richard Thomas in their 1964 article “Nature of Argillaceous Odour”, published in the journal Nature. The neologism is made up from the Greek petros, meaning “stone”, and ichor, meaning “the fluid that flows in the veins of the gods.”

The reader with alert powers of deduction will by now have understood that it has rained. I little thought when I wrote in June that another month would pass with not a drop of moisture. 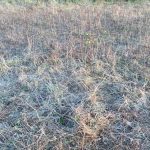 The colours of the landscape had by then become a blanched restricted palette, and  over the course of July green became a rarity: the ditches, long dry, retained enough residual moisture to keep a thin line of verdure along their course, but this gradually diminished to nothingness, and soon even the stressed trees started to lose leaves and shrivel. Grass bleached almost white, crops palest gold or cream, gardens brown and dying. Heat hung heavy in the stifling air. All talk was of the weather which surpasses the legendary summer of ’76.

On the Common there is precious little grass left, leaving only rubbish (weeds, in farming-speak) and some of the horses have been taken off in order to conserve feed. The pond from which they drink is at an all-time low, a churned and muddy puddle. 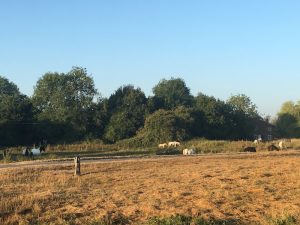 The longed-for rain came with a storm towards the end of the month. Farmers rushed to get in crops as the clouds approached, bales perched perilously high and leaning. The fields either side of my house were harvested simultaneously,

continuing till the first drops fell, and a violent wind sent the straw flying. 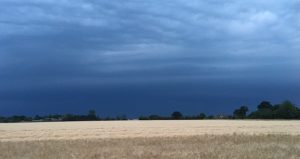 But alas it was the night of the blood moon, the longest total lunar eclipse of the century. After weeks and weeks of clear skies there was no chance of even a glimpse; the evening before, or after, would have given us all a clear view. Maybe better luck for the Perseids in August, but mid-August is notoriously cloudy here. 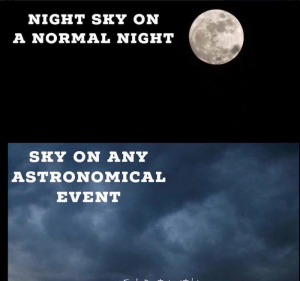 But oh! It has been glorious. The beauty of the very early mornings just after sunrise is worth all the sleepless nights.

The dog and I are out then with cool air on our bodies after the stifling darkness. The mornings now are almost silent: there may be a yellowhammer “little-bit-of-bread-and-no-cheeeese;” sometimes the menacing mew of a buzzard; very rarely now a skylark high high in the still air. We go over stubble fields and she chases hares; on paths through the wheat and she dashes up and down the tramlines, the tip of her black tail visible – a swift-moving shark’s fin surfacing on a sea of gold. 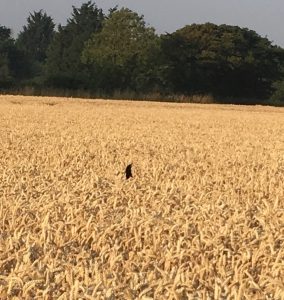 She is nearly 20 months old. The relationship deepens, and owner and dog communicate more and more by body language. She knows the meaning of different ways of my standing up, or of a search for keys, or even of a change of clothes. She knows the tone of a sigh. She observes the raise of an eyebrow. And I know her. There is something so poignantly endearing watching her struggle to control her impulses: a large rabbit sits provocatively on the path in front of us; she starts forward; I whistle her back; she quivers, trembles with desire. But she comes back.

She is doubtless my last dog. I have tried to keep something back, to not give her my entire heart for fear of 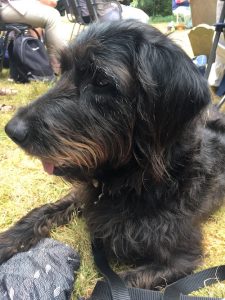 the loss which one day will come. Those who know the aching space in a home when a dog has died will understand. But she has claimed my love completely. I must do as she does, live in the moment, and not fear pain.

A recent, but already dear, friend has just had to have his old dog put to sleep. He has allowed me to quote the poem he wrote:

Go now, chase the deer and pheasant, over heath and fields,
through glade and vale, greet the Morning Star,
‘til the yearned for dawn, disperses the dark-aching shadow, and,
at my side again, eastward looking, from warm shingle, gold flickering to the horizon, heavens and seas meld deepest blue and we too, rest in peace eternal.

High summer. The time of meals, festivals, outings. On one of the real furnace days our parish held its annual outing . Do not conjure up pictures of a Cider-with-Rosie jollity. No – these excursions were initiated seven years ago, and graced with the name of “pilgrimages”, and always involve places of significance in the Christian history of our area. The first was to the wonderful ruins of St Benet’s Abbey (founded in the 11th century) in the Broads. The first and the best: we arrived by boat from Ludham, heard Mass and picnicked among the ancient stones in the sultry heat, watching boats sailing, as it seemed, through the fields. This year it was to the nearby village of Hoxne, to honour the patron saint of our parish, St Edmund. 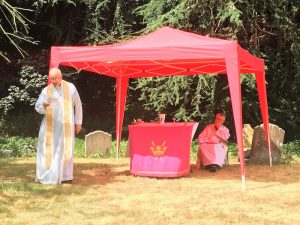 Local legend has it that, after being routed in battle against the Danes, King Edmund of East Anglia hid under the Goldbrook Bridge. The reflection of his golden spurs glinting in the water revealed his hiding place to a newly-wed couple crossing the bridge. The couple informed the Danes who promptly captured Edmund and demanded he renounce his faith. He refused and was tied to a nearby oak tree. After whipping him, the Danes shot spears at him until he was entirely covered with their missiles – like the bristles of a hedgehog. Even then he would not forsake Christ and so was beheaded and the head was thrown into the woods. It is alleged Edmund cursed all married couples who should pass over Goldbrook Bridge, and to this day brides and grooms will not cross the bridge

The great oak tree stood for 1000 years until it fell in 1848. The tree’s trunk was over 20 feet in circumference. When the tree was cut up, it is said that an old arrow head was found deep within the tree, five feet from the base. Today a stone cross in a field marks the spot where the tree stood with an inscription “St Edmund the Martyr AD 870. Oak tree fell August 1848 by its own weight”.

Parishioners gathered in the grounds of Hoxne church for Mass and picnic in the blazing 33C heat, and afterwards walked to the Memorial. Do we believe the legends? Not necessarily. Does it matter? No.

Another outing. The regular reader may recall that I have, rather to my surprise, joined the local WI. Even more to my amazement I agreed to go on a WI pétanque day, no doubt seduced by memories of my life in the far south of France…old men in berets, clichéd Gauloises hanging from their lips, under the shade of plane trees in the village square. This time it was elderly women (the average age must have been well over 70), mostly considerably overweight. But the spirit of competition, the intense concentration, rivalled the concours de boules of Gallic summer festivities – but with a lot more laughter and, alas, no pastis.

Last month I wrote of a portrait commission which had gone well. Most unusually the subject of the portrait not only recognised himself, but said – in a kind email of appreciation and thanks – that it was exactly how he saw himself. A rare tribute indeed. 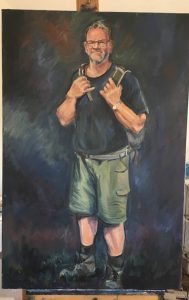 This online journal of my common-or-garden life has chronicled a full year now. If nothing else it provides a record of the weather over 12 months. To continue or not? That is now the question.