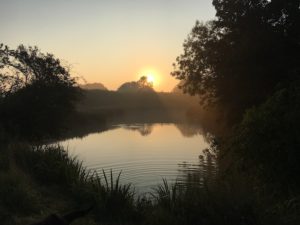 Late indeed! The pattern of July has repeated: a poor month for weather, with rain, tempests of wind which rattled through at 90kph, storms and grey…but rounded off with a heatwave, when temperature records for an August bank holiday were broken.

Last year day of heat succeeded day of heat, and in these past few days we have recaptured that certainty, that unchanging sense of eternity when the hot wind blows from past to the future. But it doesn’t endure, of course. 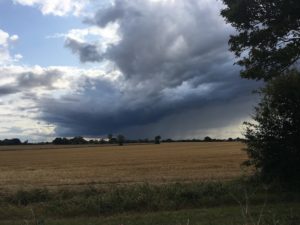 We go out very early, the dog and I, for she does not cope with heat. 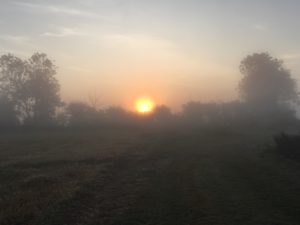 The red sun is scarcely above the horizon now. The mornings are misty, mysterious, in their promise of heat. We walk and walk until the mist recedes leaving the shimmering day, already hot.

Yes, we walk and walk. In August comes a review copy of “In praise of walking”

by the neuroscientist, Shane O’Mara, professor of Experimental Brain Research at Trinity College, Dublin. He tells us what we already know: that walking is good for our posture and muscles, helps us repair and protect organs, slows or reverses brain ageing, promotes creative thinking, improves our mood, and reduces stress levels, and that walking together is a social glue. No surprise there then. I believe it aids spirituality. For me the daily 10km is when I pray, when I give time and thought to those who need prayer, to those who are dear, and when I reflect on my life. It is also a time when I write within my head, and the origin of much of this chronicle.

All this while the dog races before me in a frenzy, for now the fields are clear there are dozens of hares, muntjac, roe deer that must not go unchased. She rarely catches anything. She can match a hare for speed, but loses it as it zig-zags and turns. One morning a large hare shot out of an uncut field straight into my legs. I don’t know who was the more astounded.

And for once the sky was clear mid-month, and I stood outside at night enjoying the celestial fireworks of the Perseid meteor shower, while the dog sniffed the scents of the summer night.

Harvest is all but done, safely gathered in, and the surrounding sea of gold ebbs away to be swallowed by the advancing browns and umbers of ploughland. 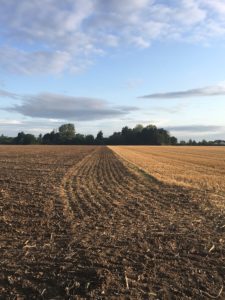 Individual farms have their methods of stacking straw, but soon these too will disappear from the fields, and the year of production begins all over again.

And in a minor key my own harvest too…potatoes, a glut of courgettes, tomatoes, beetroot, chard, lettuce. The beans are done; leeks, cavolo nero, broccoli still to come. The rosy eating apples tumbled down in the storms and are fed to the chickens. My fig trees are alive with the rustling of birds keen to get to the luscious fruit as soon as it softens. 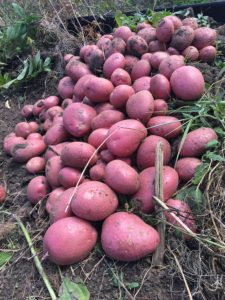 Farmers complain; it’s what they do. Now it is those who raise livestock who think they are being unfairly targeted in our fashionable scramble to reduce the environmental impact of the consumption of meat and dairy. I no longer buy meat unless it is for someone else. 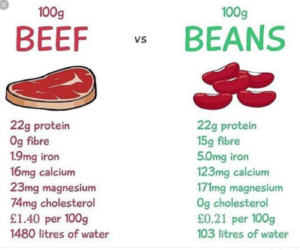 The arguments rage back and forth, and each is sure of the solidity of the moral high ground beneath their feet. There is so much more each of us could do in living more simply and sustainably, and no doubt all of us throw stones from our glasshouses (unheated glasshouses, I trust). One of the targets of my self-righteous projectiles is the huge, gas-guzzling 4x 4s which proclaim “I have moved to the countryside” (why ‘side’, please?), and whose owners have rarely if ever any cause to drive off-road. But I am as guilty as anyone: I drive; I have flown this year. If I could afford trains I would, and if there were any buses here I would use them. Our last (weekly) bus was axed ten years back.

Now I must admit that, hypocritically, I have to take a plane in October to Santiago de Compostela. Great excitement! I have been invited there for a weekend to see the hanging of my Camino pilgrimage diptych, to a gathering of what might be called Camino luminaries. The day before the August bank holiday I sent photos of the finished paintings to the commission-er, who approved them (more than approved, he says) – and joy! paid immediately – and the panels will be dispatched by courier in a week or so. I am permitted to display them here (rather a dark photo. The original is lighter and brighter). The reader familiar with walking pilgrimage in general, and the Camino in particular, will swiftly discern all the symbols. 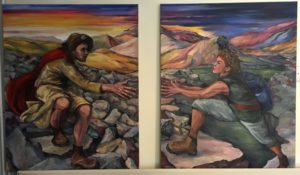 One waits years, trudging through a desert of self-doubt, and then validation comes all at once. Over the August bank holiday weekend I then sold five paintings. No doubt another few years of desert will follow.

The regular reader will have discerned long ago that I am a pessimist (I prefer to say realist). Recent research in the States suggests that optimists, and those who think positively live on an average 11-15% longer than pessimists. Hmmm…Amazing that I have lived this long, then. I can only say with Mona Lott from ITMA “It’s being so cheerful as keeps me going.” 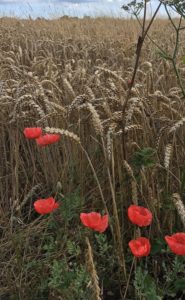 I have recently resumed the post of communications officer for our parish, and had the task of sending to local and church media a minor excitement. In the exceptional gales mid-month a stone finial cross on the roof of St Edmund’s Roman Catholic church blew down and crashed onto the sacristy roof, before bouncing to the ground and narrowly missing some of the famed Victorian stained glass. In the sacristy at the time, and directly underneath was the parish priest. Naturally I billed the story as a “miraculous” escape. But I was tempted rather to head it “God strikes St Edmund’s”, for the reader will recall that a year ago I wrote of the IICSA report on the scandal of child sexual abuse at Downside and Ampleforth abbeys. That same parish priest was named (if not shamed) as one of the abbots on whose watch these crimes were allowed to happen unreported to the lay authorities. 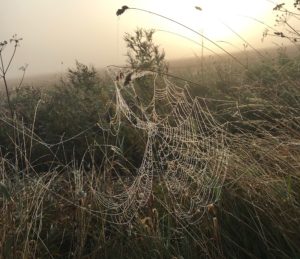 Every day for more than three years now I have said to myself, “Things can’t get any worse.” I don’t mean my own situation, for I am greatly blessed in my life. No, this is the continuing long slow suicide of the United Kingdom, and my own feeling of a visceral wound of being separated from part of my culture and history. Ever since the result of the “advisory” referendum in which 52% of those who voted – reduced by years of “austerity” and victims of a mendacious campaign which played upon the fear of the Other – stated their desire to leave the European Union and “take back control”, our once great nation and revered democracy has been tearing itself apart in a mix of farce and tragedy. But it has got worse, relentlessly every day. And now our parliamentary democracy itself is in jeopardy: we have a prime minister elected by 0.13% of the population, with a majority of one in the House of Commons, who has prorogued Parliament, leaving MPs opposed to the destructive No Deal likely to be foist upon us by monomaniac Brexiteers a matter of a few days before the 31 October deadline to stop it.

I wake after little sleep, day after day, with a sense of dread at the impending national suicide. I echo Conan Doyle in the final Holmes story “His last bow.” There is an east wind coming…unless we can stop it. Why are we not taking to the streets, stopping traffic, occupying the Palace of Westminster, manning the barricades?

“Good old Watson! You are the one fixed point in a changing age. There’s an east wind coming all the same, such a wind as never blew on England yet. It will be cold and bitter, Watson, and a good many of us may wither before its blast.”

My readers expect more lyricism from these monthly reports. I apologise for the tone of this one. But to end with a smile, I bring you another example from orthographically-challenged Suffolk. 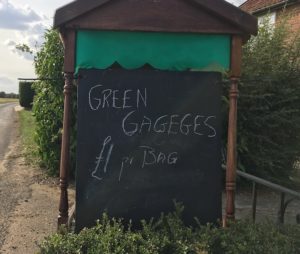