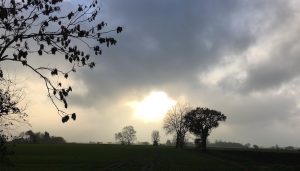 November’s main photograph was taken just before two o’clock in the afternoon towards the end of the month. Darkness already visible.

Light dies before thy uncreating word:

And universal darkness buries all. (Pope)

When was November decreed the month of the dead? The celebration of All Souls on the second day of the month naturally follows the feast of All Saints on the first, but when did that tradition arise? And suppose the Armistice had not happened in November would we be commemorating the war dead in, say, May or June? It seems entirely fitting that we remember our dead as the light fades, the leaves fall, and the land becomes colourless, featureless. The mournful, haunting Last Post which rings out round our war memorials in the chill air strikes cold in our hearts as we know that we, too, must follow…as night follows day, as winter follows summer. 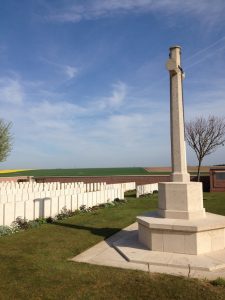 This year saw a hundred years pass since the guns fell silent and that ‘war to end all wars’ ceased its terrible slaughter. Two years ago, on my way to Rome, I walked along the line (one of the lines) of the Battle of the Somme, where exactly a century before nearly half a million British and Commonwealth troops died. The rolling country was gentle, green, and beautiful – as far from the hell of the blasted landscape of battle as it is possible to be. 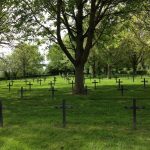 Larks sang exultantly high above. Every mile or so, down narrow lanes, in fields, on farm tracks, there were immaculately kept Commonwealth war graves. I stopped and read some of the gleaming white stones through my tears. They were so young. Tellingly, the German cemeteries are locked, their dark iron crosses each witnessing to several dead.

Later in my walk to Rome, coming down from the Paso della Cisa – the gateway to Tuscany – on a tiny country road, I came across another, half-hidden, memorial to two British SAS men shot by the Germans in 1943. It is decorated, poignantly, with some faded imitation flowers and a poppy wreath. Captain Patrick Dudgeon and Parachutist Bernard Brunt were part of Operation Speedwell, tasked with disrupting German forces and severing their supply lines. Despite being in uniform and unarmed the two were condemned to death, led down the mountain to a point just past the memorial stone, and executed by firing squad. They are not forgotten. 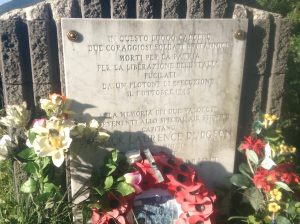 Before the light finally died and gales swept the remaining leaves from the trees summer tried to reassert the dominance of the past six months: there were a few last days of warmth and sun and huge blue skies. But they are now vanquished by cloud and rain, and the summer flowers are gone:

The bones of the land are visible now in the harsh geometry of ploughed fields, and the skeletal trees are unsoftened by foliage. 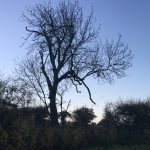 All except the oak, which clings to its leaves long after those of lesser trees have become drifting susurrant carpets under foot. The oak is symbolic in many mythologies, and in its strength and steadfastness and longevity it is easy to see why. 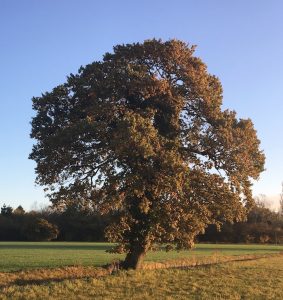 In ‘War and Peace’ Tolstoy makes the oak a metaphor for Prince Andrei Bolkonsky:

“At the edge of the road stood an oak…With huge ungainly limbs sprawling unsymmetrically, with gnarled hands and fingers, it stood, an aged monster, angry and scornful, among the smiling birch trees. This oak alone refused to yield to the season’s spell, spurning both spring and sunshine….It stood…scowling, rigid, misshapen and grim as ever.” 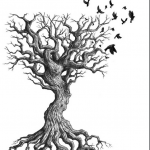 Bolkonsky comes upon the “aged, stern, and scornful” oak tree when he is recovering from his war injuries and distraught from losing his young wife; he is weary of life. The oak tree, like the prince, has been wounded. It has had its bark scarred, in the same way that he has been hurt in battle and in life.  Bolkonsky too is “stern and scornful.” Despite its wounds, the tree is resilient and continues to stand.

But come one real sharp frost the oak leaves too will go with the next breeze:

do on the oak, have with one winter’s brush

Fell from their boughs, and left me open, bare,

For every storm that blows (Timon of Athens)

Open and bare is not a bad description of how I feel in the dark days, and resilience gives way to self-pitying vulnerability. One (only one) kind reader picked up the veiled mayday call of October’s blog, understood that depression was not far off, and issued an invitation to cheer me. And so I went to participate in her dog’s second birthday. Cake and a good time were had by all. 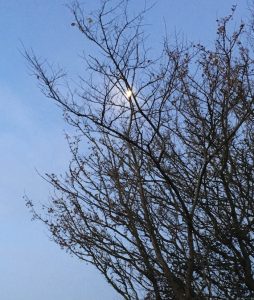 Abide with me; fast falls the eventide;
The darkness deepens; Lord with me abide.
When other helpers fail and comforts flee,
Help of the helpless, O abide with me.