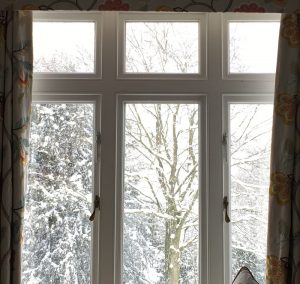 The snow is pouring out of the sky – a white out – whirling wildly, and the strengthening wind sends it crashing and avalanching heavily off the branches. I love snow with a child’s excitement: the world is transformed into a place of tranquillity and beauty. People, too, are changed – all too temporarily – by it: they stop and speak, they help neighbours, they face challenges together. 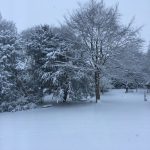 I have a dress circle view of it, but I am not out in it, enjoying the purity of the white fields, watching the young dog cavort and frolic, seeing the myriad tracks of small animals. This month’s journal is written from a bed. 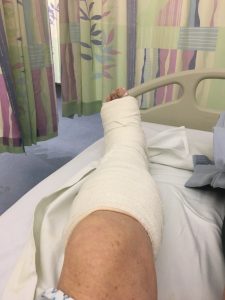 I have just been discharged from the Norfolk and Norwich Hospital, having had a double and displaced fracture of the base of the tib and fib pinned, plated and plastered. In front of me stretch a good three months of recovery and the frustration of dependency. When my father was in the last year or so of his life, and obliged to accept a certain loss of independence and dignity, I used to say (no doubt pompously) that dignity lies in acceptance. These things come back to bite us.

On long walking pilgrimages one learns the kindness of strangers, and to trust that provision will be made and needs met. Now it is the goodness of friends and family. I am accommodated by dear friends in luxury surroundings being waited on till a relay of dutiful daughters takes over. The dog is being looked after. I want for nothing.

You couldn’t fault the much-derided NHS (except in the culinary department, but then I wasn’t hungry). The care was first class, explanations were given, I was treated with intelligence and respect. I tried to add up what it would all cost in the private health care sector (those of us who pay vets’ bills get a glimpse of the astronomical sums for surgery and nursing and drugs).

But it was nevertheless an enormous relief to be liberated to a peaceful bed where the nights are silent and the room dark. Because of the lack of an orthopaedic bed I was put on a surgical ward (with its attendant risks of infection from open wounds – I have to wash with anti-microbial stuff for another week). A stout Polish woman beside me snored like a grampus all night, her phone regularly leaping into life with a loud tinny tune. On the other side an elderly Irishwoman with dementia (and obviously frightened) took exception to the Filipino care assistant, and the nights were filled with piercing shrieks of “Get him away from me. Don’t let him touch me. They’re doirty doirty people.” The patience and kindness with which this was met was astounding. But three nights passed with little rest.

And so here I am.

The Year of the Dog!

And how did all this occur? Ah, the irony – at the Chinese New Year and the dawning of the Year of the Dog! I was walking up a country track with a local dog-walking friend and her black Labrador. The two young dogs play fight all the time and came racing at top speed up the track behind us, heads down, tussling over a stick. My dog weighs 26kg…bang! I went down screaming. But then had to hobble home with a stick. Oddly, it didn’t hurt that much, and so I put off going to A&E thinking it might improve. Five days of lying on a lonely bed, shuffling downstairs on my bum and a friend bullied me into seeing a doctor. The doctor pronounced “Ligamentous, but get an x-ray to be sure.” Just as well I didn’t, by then, believe him. Another kind friend took me to Casualty. The worst bit was the manipulation of the fracture before the temporary cast. Entonox somehow didn’t quite cut it.

All this has meant I didn’t get back to Calais with a second load of cold weather goods (tents, sleeping bags, hand-warmers, clothes) for the Auberge des Migrants. The situation there is worse than ever with the French police under orders to eliminate “tout point de fixation”, which means that anywhere a migrant can linger, or find a spot to shelter in, must be destroyed – and this means the brutality I described last month. I cannot imagine their life in this freezing weather, burying their meagre possessions like animals to keep them away from the police. Fortunately a fellow parishioner took it on himself to go in my stead. 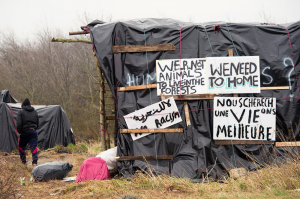 Before my accident all was going so well. Spring seemed just around the corner, the mornings and evenings noticeably lighter, the signs of hope multiplying.

My elderly cat, having spent a year in huffy isolation outside in a cat kennel because he refused to come inside to be plagued by a bouncing puppy, suddenly decided he’d had enough of winter, and now prowls the house and refuses to leave. He tolerates the dog who is delighted to see him and wants to play. 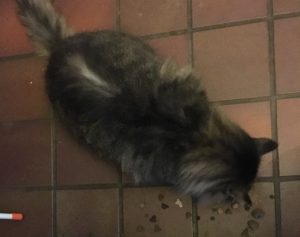 He has even decided that he prefers dog food to his own food, and presents himself at dog feeding time to get in before it has all been wolfed down. The cat shows an intelligence not seen hitherto : the dog has a Pavlovian response to the 6pm chimes of Big Ben – “Supper time!” – and reminds me this is the hour. The cat now also recognises the moment and is ready to get there first.

The rescue chickens, unrecognisable from their former featherless selves, are thriving. I had started to give them some liberty to range, and they took to it like….ducks to water, scratching and pecking and finding worms. 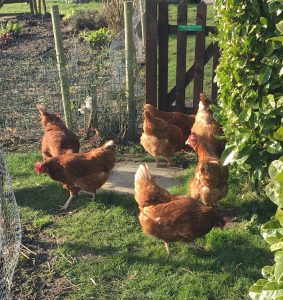 This month’s journal is very “me me me” but I know the reader will understand. In a month’s time shall I still be resigned, still accepting? Certainly still dependent, but at least by then I should be able to be weight-bearing a bit. Watch this space!