The Common is strangely empty; it seems larger without the mares and foals which were taken away mid-month, not to return till May. Now the only life I see is barn owls, buzzards, and colonies of rabbits. The pond is at the lowest level I have seen, save in very dry summers. The garden now is similarly bare – vegetables are harvested. I clear and dig, clear and dig. 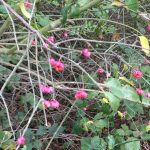 Reader, forgive a rant: I begin where I ended last month: the reliance on an internet connection and the impotence, fury and frustration engendered when this means of communication is cut off. This is 2017, and broadband is no longer a luxury or a novelty; it is the fuel that powers work, relationships, leisure. Without it there is isolation. For three weeks in a total of six I have been disconnected from a large part of my world. British Telecom has fobbed me off with lies, excuses, promises and missed appointments. The “executive level” case handler said “If it’s on today that’s all we can ever hope for.” So much for the term “service provider!” 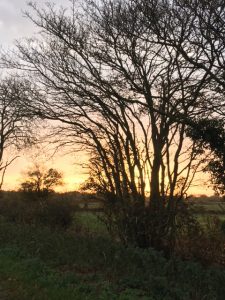 Night is already falling as I write this at 4.30pm; the clocks have been put back an hour, and we are now on a winter timetable. This darkness also insulates and isolates from the outside world. It is easy to understand why alcoholism is more prevalent in the countries of the north where winter daylight lasts only a few hours. In my early twenties I went straight from my first year of living in the brilliance of a southern French sun to a winter in Glasgow where it seemed never to get light, and where the cold seeped into my soul. Shillings were saved to feed the gas meter, and I stayed in bed to keep warm. I have found the dark of the year difficult ever since.

But the beauty of autumn brings compensations. Yesterday saw the first crisp chill and a touch of frost. 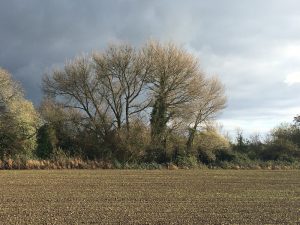 Where the lane was lined with straw in August and caked in muck last month, now leaves drift down in a thick carpet, eddying as the breeze lifts them. The last fields are being ploughed, including “mine” – the vast expanse over which I look from my kitchen. The tractor works to and fro all day, followed by a white wake of squabbling gulls which swirl and settle after it. The light strikes the deep ridges and furrows, surrounding me with a dark rolling sea whose waves lap the edges of my garden. 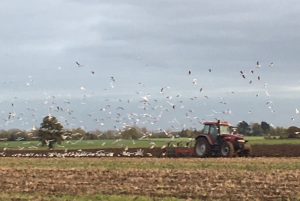 Our morning walks start in torchlight, and end in sunlight. The dog rolls in deep grass wet with dew, grunting in ecstasy as she does.

Despite the dryness of this year there are many mushrooms under foot. As a child I would go out with my father to collect horse mushrooms to eat with bacon for breakfast  (“mushers” he called them – was this the language of the Black Country, where his own mother grew up?). I too used to pick mushrooms, but I have been wary for a while now. Years ago when I worked on a local newspaper I was a stringer for the Sunday Express. I sold them a story about a Norfolk woman who had gone to pick mushrooms and came back with a good basketful. Her husband told her not to eat them, but she cooked them and ate all the same. They were Death Caps, and she was rushed to intensive care in London at death’s door.

I can’t now remember whether she lived or died, but the Express take on it was – this is what happens if you disobey your husband. But that was 35 years ago…

The weather has been far from “normal.” The year has been the driest I can remember – winter, spring, summer, autumn with little rain. Mid-month the temperatures rose, and it was shirt-sleeve order. My guests and I ate Sunday lunch outside. Then came Storm Ophelia which battered our western regions, but which here produced what some said were “apocalyptic” phenomena. On a fine if breezy afternoon I suddenly looked up and saw the still-high sun was blood red.

Then the sky darkened as though the sun were eclipsed, and then all turned an eerie yellow-orange. Although I knew it must be Saharan dust blown ahead of the storm nonetheless atavistic fears rose within me. Hard not to see it as an omen presaging some disaster. 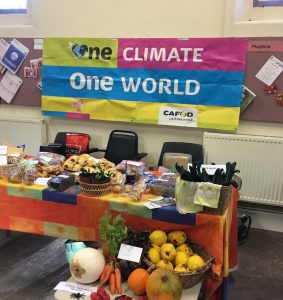 Concern for our planet, for neighbours near and far, for the world we are wishing on our children and grandchildren has prompted two friends and me to work for CAFOD, the Catholic Fund for Overseas Development. This organization leads in trying to implement the care for the environment (“our common home”) urged by Pope Francis in his encyclical Laudato Si’. We hold a stall at a monthly local produce market, selling cakes, biscuits, scones, sausage rolls, garden produce, plants and seeds as a small contribution to further this work.

A year ago, on 21 October 2016, I arrived in Rome after a 2000km pilgrimage on foot from Canterbury. This is not as unusual an achievement as it may sound, but for me it was a great adventure – throwing myself on the kindness of strangers and the mercy of God. 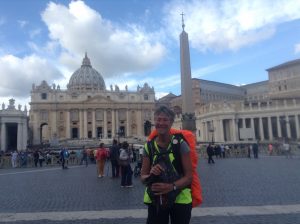 It was my fifth walking pilgrimage, and since retirement I have tramped through France, Spain, Switzerland and Italy. I know now that without these minor adventures into the unknown, and without plans and possibilities of such, something in me feels trapped and only half alive. I tell myself that the journey into old age must be my adventure now…

This October entry in my online journal makes for rather melancholy reading, reflecting the dying of the year, and now we begin November, the month of the dead. 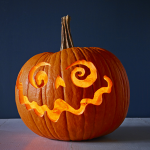 A note to the new reader: to understand where I am coming from, in both senses, read the static information pages in the sidebar to the left: Introduction – The Common – The Garden.