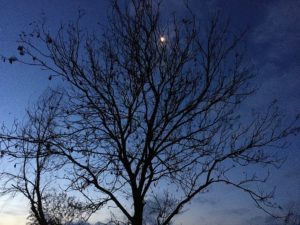 Australia burns in record springtime temperatures. Venice floods with the highest acqua alta since the disaster of 1966. More floods in Yorkshire and the east Midlands. We are told the planet’s future is at the tipping point. 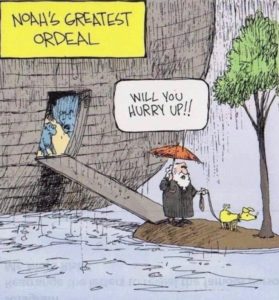 Pitiless and relentless, day after day; low grey light. In the early morning the Gatling gun salvos against the window announce another drenching walk in the dark. Must I get up out of a warm bed and face it? The dog says yes! Ditches overflow; some roads are passable only with care. The mud turns liquid and no longer weighs my boots glutinously down. The paths are under water and the exuberant dog sends tsunamis over the top of my boots. As we walk there is no autumnal susurration and swish of drifted dead leaves, but  a soggy dispiriting squelch.

And then today the miracle of a sunrise seen. Colour returns to the landscape. Those few trees still in leaf – the oak and the field maple – which were a dull brown in the dark grey landscape turn suddenly to flame, russet, gold. The world is glorious once more; a million drops of water shine and dazzle. There is light.

After 18 dry months the Common is restored to its winter status as a waterland: we wade rather than walk over it. Where once the summer’s mares and foals grazed, ducks and geese now swim. It is hard to remember that this is how it should be. 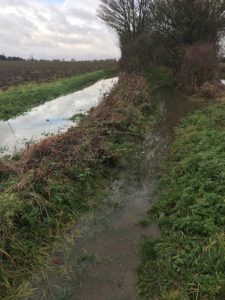 The mud is not just a feature of fields and paths. In this deeply rural spot where I am writing the lanes are dangerous with slathers of liquid mud and huge gobbets of solid clay. Tractors and farm lorries and – above all- sugar beet harvesters and transporters spread it. A rickety hand-written “mud on road” sign scarcely does justice to the hazards of the muddy skating surface. 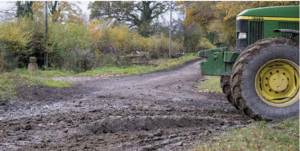 We live in the country, but maybe we accept it too readily as just part of life, nothing to be done, farmers rule. However, to leave mud on the road is illegal. The Highways Act 1980 makes it an offence to deposit mud and other things on the highway (S148). In addition, the act provides that if a person without lawful authority or excuse deposits anything whatsoever on a highway in consequence of which a user of the highway is injured or endangered, then he is guilty of an offence (S161).

Therefore, if a farmer or contractor deposits mud on the highway they run the risk of committing a criminal offence and may face prosecution and a fine. It is not very well known but in addition, if there is significant mud on a vehicle, such as a tractor, it may constitute the more serious offence of dangerous driving under the Road Traffic Act 1988. This is because S2A of that act states that the term “dangerous” can include anything attached to a vehicle (which can include mud).

But, a big but…the “Farmers Weekly” opines:  “However, I think it would have to be a significant amount of mud, and/or a serious accident and/or a repeat offender before the police would be likely to consider bringing this additional charge.” Indeed. Or any charge at all.

In common with so many other offences (I daily see drivers doing at least 50mph through villages, and many on hand-held mobile phones) it is not policed here. Nor is it likely that any of  Mr Johnson’s proposed 20,000 extra police will be seen along the lanes where I walk and – perforce – drive.

The main cause of the hazard is the harvesting of sugar beet. Despite the UK’s modest size, it is the eleventh largest producer of sugar beet worldwide, behind giants in the top ten such as Russia, the United States or China. This gives our nation the dubious honour of having the largest proportion of our land devoted to sugar beets of all countries, and much of this happens in East Anglia. 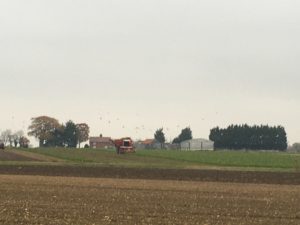 Sugar beets were not grown on a large scale in the United Kingdom until the mid-1920s, when 17 processing factories were built, following war-time shortages of imported cane sugar. Before World War I, with its far-flung empire, the United Kingdom simply imported the sugar from the cheapest market. However, the war had created a shortage in sugar, prompting the development of a domestic market. The first sugar beet processing factory was built at Lavenham in Suffolk in 1860, but failed after a few years without the government support its counterparts on the continent received. The Dutch built the first successful factory at Cantley in Norfolk in 1912.

Here in north Suffolk we know that any journey to Bury St Edmunds during the sugar beet campaign, which starts in September, will be a slow one, as trailers loaded with beet are pulled by tractors in snail-like processions along the A143 to the Silver Spoon factory. Why is it called a “campaign”? Apparently because it is a huge undertaking and requires coordination of farmer, contractor, haulier, and receiving station. “Campaign” of course comes from “campagne”, the French for countryside, and military campaigns used that vocabulary of “taking to the field”. In the harvesting and transporting of sugar beet a neat example of a word returning to its origins. 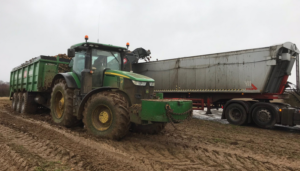 Another campaign preoccupies me, for as I write it is less than two weeks to the General Election. That anxiety felt for nearly three and a half years now rises in me, knotting my stomach and robbing sleep, for the Tories have a good lead in the polls…not that polls can be trusted. If they win they will, in their words, “get Brexit done”, whatever that means, and oh then we can kiss goodbye to their campaign promises of spend spend spend . Except that the costings suggest that for all those promises spending on public services will not go back to the level of a decade ago. And Brexit will not be “done;” it will only just be beginning and we ain’t seen nothing yet. The future is dark. 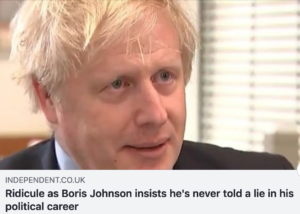 These are not my words, but they are my sentiments:

Do not go gentle into that good fight 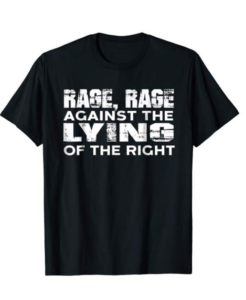 The Truth should burn and guide us on our way
Rage, Rage against the lying of the Right.

When the wise with their educated sight
Call for compassion in the Laws and say
Do not go gentle into that good fight.

Good men upon the Left must use their might
To make their deeds mount up and every day
Rage, Rage against the lying of the Right.

Young people with a vision now alight
Must gird their loins and gain in strength so they
Do not go gentle into that good fight.

While women know misogyny by sight
And violence fills their life they need to say
Rage, Rage against the lying of the Right.

So all of us who want to stop the blight
Curse, bless and shed those fierce tears I pray
Do not go gentle into that good fight.
Rage, Rage against the lying of the Right.

Meteorological winter starts. The trees stark and skeletal stand out against the sky. The deep dark of winter is nearly on us. But even in the darkness I know that the sun will continue to rise, and occasionally gleam upon us. I know exactly where it rises in December, exactly where it rises at any point in the year. I could tell the date from the sunrise. This is a daily miracle which says we will survive. 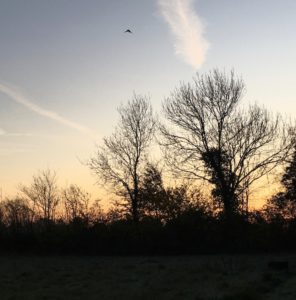