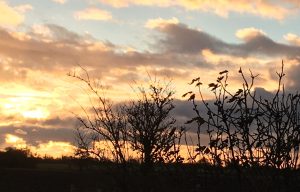 The wood burner is alight.  This morning snowflakes were whirling on the north wind as I walked. I have just seen another flurry from my window as I write. Despite the inconveniences caused, and the cold which invades the house and my bones, there is a comfort that winter weather still stays true to itself. Often in the last decade or so it has been colder in June than at Christmas. The gales of last week brought down remaining vestiges of leaf, as well as breaking panes in my greenhouse. Now the skeletons of trees stand stark against the sky.

We have had the first really frosty mornings when the ground crunches underfoot and I see my breath white on the air as the dog and I set out.

As we start out on our morning walks the dog gallops off invisible in the darkness: “Only a felon has dogs you can’t see in the dark” (Wolf Hall)…. 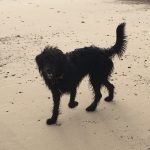 In mid month a visitor comes to stay, an old friend. The weather is obliging, with a bright low sun.

One day we walk with the young dog through Dunwich Forest and Heath, and back along the beach to Minsmere Sluice and Eastbridge. My friend, in holiday mood, eats a huge plate of fish and chips and drinks Adnams’ winter beer. I ask him ‘What would you like to do tomorrow?” He replies, somewhat whimsically, that he has a Romantic notion of a wood with beautiful trees surrounding a ruined church.

“I can do that,” I say. And we walk under deep blue sky across ploughed fields to the ancient wood wherein lie the ruins of South Elmham minster. It is a magical place, charged with atmosphere even on a sunny mid-morning. The church was built on the remains of a Roman temple. Does that explain the very real sense of …something…felt there, or are we merely prey to our imaginings when we see a ruined church? 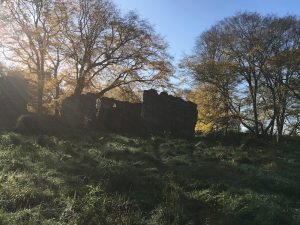 And here I put on my pedagogic hat:
There is apparently evidence for late Roman and Saxon occupation on or near the site, and when I first walked here a quarter of a century ago I believed the building was sixth century, and connected with St Felix. Several shards of Roman pottery were found in 1964-65 in trenches dug across the enclosure ditch, on the surface of the adjacent field to the south, and in small-scale excavations conducted in 1984 to the south of the church. There are also early 19th-century records of urns filled with burnt bone and ash, probably from a pagan Saxon cemetery. 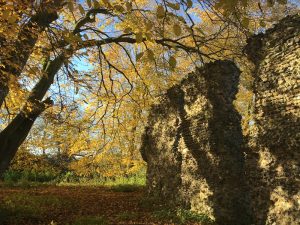 When the buried footings of the south-east corner of the nave were exposed during the excavations of the 1960s, a weathered fragment of late Saxon grave slab was found built into the wall, perhaps obtained from a Christian cemetery nearby. However, at the date of the Domesday survey in 1096, the manor of South Elmham was held by the bishop of Thetford, and was purchased shortly afterwards by Herbert de Losinga, first Bishop of Norwich. It is likely that the Minster was built by de Losinga, who is thought to have been responsible also for the construction of a similar church at his manor of North Elmham (in Norfolk), and that it served as an episcopal chapel, although there is also some evidence that the site of the bishop’s palace nearby may, for a time, have been occupied by a small monastic foundation. 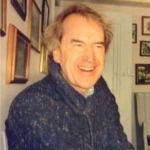 The third week of the month saw a year since one of my near neighbours died. We use words such as “tragic” too glibly and easily, but his death seemed to me to have the hallmarks of a tragedy. Jamie Perkins had come to our village, and to this little outlying hamlet, less than two years before. He was a fine art dealer, responsible for identifying a Constable, and involved in its sale to Tate Britain.

Jamie was the best company: informed, open emotionally, sweet-natured. I always felt better when I had been chatting with him.  But he was also a deeply troubled man who found some solace in a quiet Suffolk life. He suffered from recurrent depression and anxiety, his “black dog”. He enjoyed open water swimming, often driving off to Walberswick at five o’clock on a summer morning to swim, accompanied by his canine black dog, Eddie. That night in November last year he drove to the nearby River Waveney, and his car was found – unlocked and with a door open – at 10.30pm. Unusually, Eddie was left at home. There was no verdict of suicide, but he was agitated and disturbed that week. 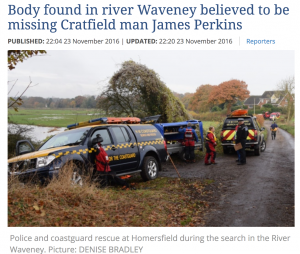 The village church was packed for his memorial service. He had found his way into all our hearts.

In my younger days as a reporter on a local paper I attended many inquests, often hearing a verdict of “suicide while the balance of the mind was temporarily disturbed.” I realise that those words might, perhaps, bring comfort to those grieving, suggesting that such an act was out of character and if the deceased had been thinking straight s/he would not have done it. I am sure some suicides are the result of an angry or despairing impetuosity, but it seemed to me then, and still does now that experience has made me better acquainted with suicides, that it is a lucid and rational act, the logical way of ending a situation that has become untenable.

And as I enter old age I truly hope I might have the courage and the means to spare myself and those close to me the sight of my unbearable pain or decline. The Lancet Psychology this month said:

Suicide in old age is often considered to be the result of a rational decision. Frailty, dependence on others, loss of a partner, and loneliness are seen as reasons that might explain many instances of suicide. Similarly, suicide can be interpreted as a legitimate exit in case of dramatic changes in social status and role. Ageistic views tend to consider depression as a normal feature of the ageing process, and advanced age as the antecedent of an anticipated and definitive ending. Accumulation of physical illnesses and disabilities, life events, and losses can be seen as the so-called right cause to step out of this stage of life.

I said at the end of “October” that November is the month of the dead, and so I must ask the reader to forgive this rather morbid preoccupation.

I will end on a cheerful and gratifying note. Two months ago I collected ten “rescue” chickens who had lived their lives as egg machines in cramped quarters in continuous light. They came to me almost featherless, looking like plucked birds,  miserable and bewildered by their change of accommodation. Today all their feathers have grown, and they are unrecognisable from the poor specimens of a few weeks ago. Two are even laying each day, a brave and unusual act in the dark of the year. They have become bold, running to get food, sometimes taking it from my hand, and not above giving me a peck if it does not appear quickly enough.

And so we approach the frenzy which is Christmas. 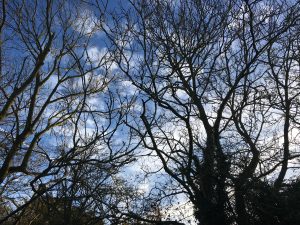