“Bad men need nothing more to compass their ends, than that good men should look on and do nothing” – John Stuart Mill

My introductory paragraph, traditionally a report on the weather and observed trends in our climate, could this month be a repetition of November’s. The reader will forgive me, for in deeply rural Suffolk my daily existence is much ruled by what is going on out of doors.

And what has gone on out of doors, with very few exceptions, is heavy rain. And more rain, and unremitting dark skies; days of little light, and a universal cold damp dripping. And mud.

However, as we descended into the deep dark of December there was, as ever, the prospect of the midwinter festival – which is what Christmas has become – to cheer us. I don’t find that the commercial noise and bustle and kitsch glare distract me from a contemplation of the spiritual meaning of Christmas, and they do delay the slide into the depression that dark and damp bring. 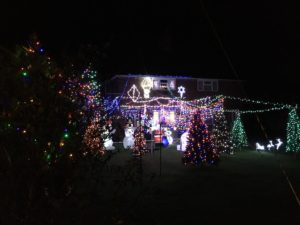 In our villages competing light shows illuminate the night – whole properties, house and garden, given over to flashing snowmen, ho-hoing Santas, rooftop reindeer, dangling blue icicles. A transient rural East Anglian Vegas. I like the attitude depicted below (which is not, alas, from Suffolk): 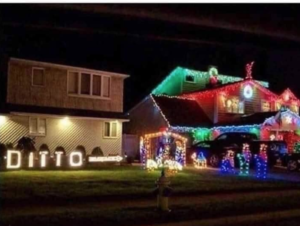 In our farms the preparation for the food fest of Christmas takes a different turn. One regular early morning walk takes us near a farm which sells free-range geese and turkeys, and during the autumn months I hear every day the geese wake up with much raucous honking and screeching. A few weeks before Christmas suddenly a deathly silence falls. The geese are no more. Instead a powerful security light illuminates the dark fields. A gang of Romanian workers walks the miles to the farm to pluck and dress the poultry. Where will farms find labour next year? 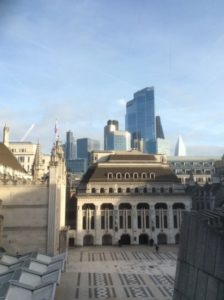 On an early December Saturday, one of the rare dry days, I spent all day at the Guildhall with its spectacular view of the City of London skyline, in a meeting of trustees of the charity for which I am communications officer and editor, gathered to decide on our three-year strategy. It was unexpectedly productive and good-tempered…until a colleague, our previous chairman and a former Reuters chief correspondent, surprised us all by an outburst calling current concern over climate change “hysteria,” a myth to which we should give no credence, and a Marxist totalitarian conspiracy (according to a book he subsequently ordered me from Amazon in order to contradict me. My 15-year-old granddaughter took a look at it, and her pencilled-in marginalia demolished the illogical diatribe as only a teenager can).

It is more than disturbing to hear this sort of rant from a respected colleague, or indeed from anyone. Neither he nor I are scientists, but to my lay mind it seems the huge consensus of scientific opinion is that human beings are responsible for the changes we are witnessing in climate, and that the perhaps debatable fact that we have not yet reached a point of no return, does not mean that we never shall. Of course I understand that projections are not facts, but if there is the slightest chance that these projections show us the face of the future then I believe we must act now.

It requires drastic behaviour change, which – we all know – is a difficult process. A headline caught my eye this month: “Being obese creates long-haul flight’s worth of emissions.” A study, published in the journal Obesity, alleges that the extra food consumed by the world’s 600 million obese people has a carbon footprint on a par with the whole UK, and their increased metabolism means they breathe out extra CO2 equivalent to Sweden’s annual output. I know insufficient science to rebut this, and have not seen the relevant statistics, but none of us should be smug about what we do or don’t eat, and where we do or don’t travel, and by what means. 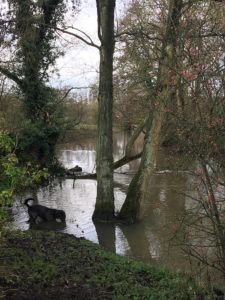 I do know that weather is not the same as climate, but it is certain that over time repeated patterns can be an indicator. Here, on what passes for high ground in Suffolk (50m), I am safe from floods, but nearby the entire flood plain of the Waveney is under water, one long lake from Diss to Beccles. One night at Syleham Mill I was forced to reverse the car down the dark lane by what looked like an endless sheet of water overflowing from the mill race, the river slapping and gurgling against the parapet of the bridge. Driving over the Common is like going along a causeway across a lagoon. On Boxing Day a daughter and I found our traditional walk via Minsmere Sluice deserted, and soon discovered why: vast tracts were under water. The dog, bounding ahead, disappeared in the depths, all but the top of her head and her nose swallowed up. Not wishing to turn back, we waded knee-deep through icy water, boots wet and squelching for the next five miles. 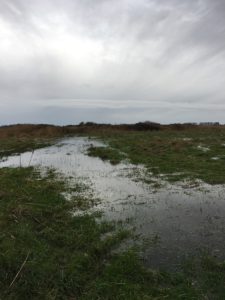 It is a favourite walk, which takes us from Eastbridge to the sea, then north past the RSPB  reserve to the Coastguards’ cottages and the National Trust, and back through heath and birch woods. These Minsmere Levels are the flood water catchment marshes that drain the area of land either side of the river Minsmere that runs  through the New Cut and out to the sea via the sluice. This tidal sluice collects water from three channels before discharging the flow into the sea, between Dunwich and Sizewell. The rains throughout the autumn have been too constant and too heavy for the drainage channels to cope.

My regular readers will know that I cannot allow December to pass without mentioning the political situation which has concerned me over the past four years in ways it never has before. Through Advent the readings which prepare us for Christmas are taken from Isaiah, from the beautiful prophetic poetry of Deutero-Isaiah foretelling an age of peace, of restoration when wrongs will be righted and justice will reign:

“He has sent me to bring good news to the poor, to bind up the broken-hearted…garlands instead of ashes, oil of gladness instead of mourners’ tears”.

On the evening of 12 December, as seconds counted down to 10pm and the release of the exit poll results, I knew that these would be the final moments of hope for a better future. The Conservative party won a huge majority – thanks to our first-past-the-post voting system – for sufficient of my compatriots voted to “get Brexit done’ (a meaningless but obviously effective slogan, which somehow persuaded people that their future would be rosier if we could get on and sever our ties with the EU). It cannot mean better. The days of the sovereign nation state are long gone; we cannot recapture them, if that is what is meant by “getting our country back.” It is incomprehensible to me that people cannot understand that unity – community – is better, more productive, safer than standing alone, grasping for illusory better deals, trying to shut our doors against all comers.

What voters seem to have forgotten is that historically the Tories are the party of “I’m all right Jack,” and that election promises of bonanza cash, which wooed and seduced and ultimately broke  the Labour “red wall” of the North and Midlands, will not materialise into prosperity, that workers’ rights will not be preserved, and broken post-Brexit Britain will mean more poverty, not less, for we shall be the poorer outside the EU. Poorer economically, politically, culturally, morally and spiritually.

Truth was the victim of this election, and already we see the consequences for democracy. Has the executive power grab which immediately followed really gone unnoticed in the pre-Christmas frenzy  – or do we not care? Look – really look – at what has disappeared from Johnson’s notorious Withdrawal Agreement “deal”, the metaphorical piece of paper (in fact 600+ pages) proudly waved after last-minute negotiations in October: 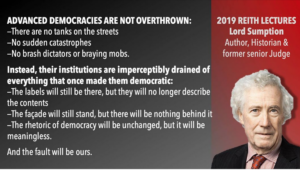 I am writing this on the 849th anniversary of the martyrdom of Thomas Becket, St Thomas of Canterbury. He took on the executive power. He too lost.

And so the old year fades with failure and the dismal decade dies, and with it much hope for our future. I am fortunate and privileged, and I am unlikely to go hungry, protected as I am by a pension and the ownership of my home, and I am blessed with the love of daughters and friends. But next in Maslow’s famous hierarchy of needs comes a sense of connection. That is going, has disappeared with any voice or agency I might once have had in this country, any influence on our future. The Black Dog is coming ever closer.