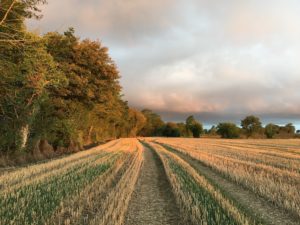 I am distracted this month from writing about what I am sure many will consider to be my rural idyll, and dwelling on the beauties of falling leaves and the autumn landscape. We live in what the (apparently apocryphal) Chinese curse calls “interesting times.”

But this blog is about my Suffolk life, and has become a sort of record not only of the seasons, but of the changing weather patterns and the effects these have on life in deepest Suffolk. 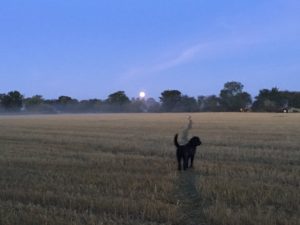 Exactly on cue, autumn arrived with the equinox. We had had a golden month till then, with heat and sun, and increasing drought. The effects of two years with less than usual rainfall had made the land almost a desert – no ponds, dry streams, empty ditches, dust everywhere, all foliage tinder dry.  The grass on the Common long gone, and the mares and foals hungry. The year pursued its usual course, the plough changed gold to umber, seagulls in its wake. We went out on calm and tranquil mornings through the dew, and every day the darkness lingered longer, and rushed in earlier each evening.

Those lovely mornings – all the more poignant because they were the last of summer. One morning a buzzard was out teaching one of its young to hunt. The youngster swooped low over our heads to have a better look, its hunting cry not yet perfected to the menacing mew – more like a seagull whose voice is breaking. Another morning a large grey heron rises from an near-empty pond and flaps slowly away toward the rising sun.

But with the equinox came gales and rain rattling against the windows, the parched grass now growing rapidly green in the warmth of low pressure systems as they pile in from the Atlantic. A torch is necessary in the morning. 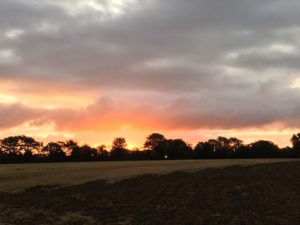 And this turbulence and invading darkness match our political weather. The storms grow increasingly violent. The calm knowledge of a democratic parliamentary system that works and with which I grew up, and which carried on more or less efficiently in the background of our lives, has gone. There have been lies, deceit, sharp practice at the highest level. There has been drama, and  language which incites to hatred and violence. Trust has gone, and with that comes an anxiety so deep that it pervades every waking moment, and robs me of sleep. No-one knows what will happen, what the outcome will be or can be. But as things stand much of what I hold dear will be wrenched away in a month’s time on 31 October. 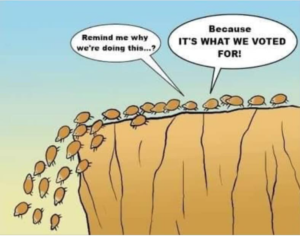 I will return to this later. The reader must forgive me if therefore my rhapsodic paeans of praise to autumn fields and skies are in short supply this month.

One sunny day early in the month the dog and I walked a path to Wingfield, a small – and as the overworked cliché would have it – sleepy village a few miles away.

I went into the church to look at the magnificent late medieval tombs, and met an enthusiastic vicar waiting for a bride and groom to come and rehearse their wedding. Seeing the dog whistle round my neck, he invited both of us in to explore at our leisure. He took me into the vestry (I’m sure that could be the first line of a bawdy song…), and then suggested I climb the vertical ladder up to the vestry loft where there is a spyhole overlooking the altar.

This tiny village was not always so sleepy. It not only witnessed but took an important part in another period of extreme turbulence in our history. It was home to one of the great families whose power and influence changed the course of that history – the de la Poles, earls and dukes of Suffolk.

Forgive me if I recount their story. It seems somehow relevant to today with its aggrandisement, treason, plotting and civil war. 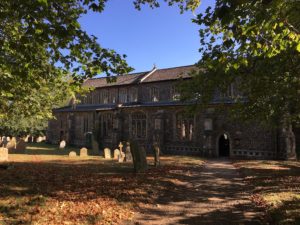 Their story begins with a merchant from Hull marrying the daughter of a local East Anglian landowner. The de Wingfields were of Norman origin, and Sir John was a fighting man of distinction who served the Black Prince and had favour at court. When Sir John died his widow had the present large church built. Their only daughter Katherine married Michael de la Pole, from Hull, who had been ennobled for his services to the Crown and had become Earl of Suffolk. Their son, also Michael, had married a daughter of the Earl of Stafford (also a Katherine), but died at the Siege of Harfleur (of “Once more unto the breach” fame). And their son was killed at Agincourt immediately after.

Michael’s brother William inherited, and served the king so well he was made Duke of Suffolk, and married Alice Chaucer, granddaughter of Geoffrey “Canterbury Tales” Chaucer. He was later impeached for treason for plotting with Henry VI’s queen Margaret of Anjou, and beheaded as he tried to cross the Channel. His body was thrown into the sea, but was later washed up on shore, and was brought back to Wingfield for burial. John, William and Alice’s son, was eight when he inherited.

Now England was in the throes of the Wars of the Roses, and John the second duke was a Yorkist, and such was his favour at court that he married Elizabeth Plantagenet, daughter of the kingmaker Earl of Warwick and sister to the future kings Edward IV and Richard III. Their son fought for Richard at Bosworth Field, but Henry Tudor, the victor, was foolishly lenient because the family was so powerful, and the de la Poles retained their titles and estates. Elizabeth Plantagenet however, plotted with her sister in Burgundy to restore York to the throne, and John de la Pole joined in uprisings against Henry VII, and was killed at East Stoke in 1487, the last battle of the Wars of the Roses.

His brother Edmund inherited the earldom, but was not duke. He and his brothers Richard and William also plotted with Burgundy against Henry Tudor. As sons of Elizabeth Plantagenet there was a good and legitimate claim to the throne. William died in the Tower; Edmund was executed in 1513 by Henry VIII, but Richard remained abroad in the service of François 1er, and was a continuing thorn in the flesh to the Tudor dynasty, but died at the Battle of Pavia in 1525.

None of these brothers had children, and so ended the story and power of one of the greatest families in the land.

The name lives on. Opposite the church with the noble tombs of the Wingfields and de la Poles is the de la Pole Arms, and the lane which leads down from Weybread crossroads towards Wingfield was originally called de la Pole lane. As  with most old names this became corrupted by use, and today is known as Dale Road, but when I first came to Suffolk it was called both Dally Po, and another  version of de la Pole pronounced as “Daily Poo.”

So, little changes in human nature and the desire to control the course of history: hubris, privilege, deceit, the seizing of power, warring factions, and a monumental battle for the soul of the nation.

Our country is divided. A friend of mine, who voted Leave, when pressed for his reasons, actually said “You can’t trust the Germans. Look at the War.” And here I get to my point: for me – and for many – statements of such idiocy (neither side is exempt from idiocy, of course) destroy relationships, drive wedges, create breaches and wounds which will not heal.

And I have to ask this question of my faith. Is it a faith that really dictates that force should never be used? It is a faith of contradictions: on one hand the injunctions to turn the other cheek, on the other the Jesus who drove merchants from the temple with knotted ropes and overturned their stalls. On one hand we have “Peace I give you, my peace I leave you”, and on the other “I came not to bring peace but the sword.”

When voices are not heard, when agency is denied, when liars and privileged bullies rule and deceive, what is left? I know that I would shed my blood if we could remain in, and enjoy the freedoms, values, and rights of,  being part of the cultural, spiritual and economic community which is Europe.

When I come to write the October chapter…what will have happened? 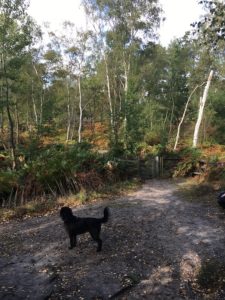